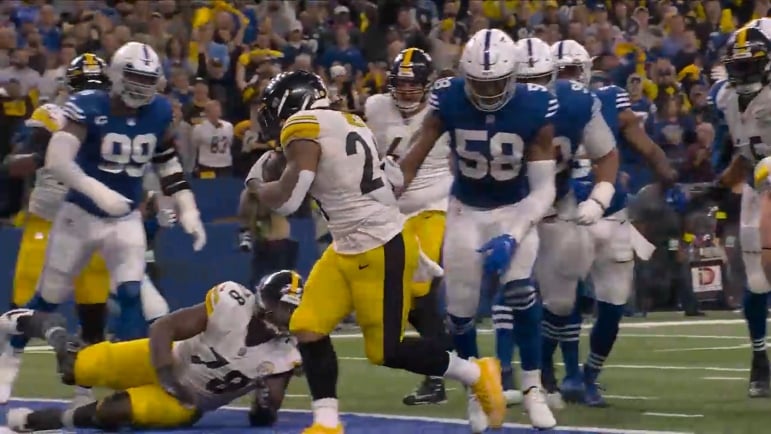 The play calling for the Pittsburgh Steelers for the majority of this season has been, to put it mildly, sub-standard. With the team looking at First and Goal from the Colts’ two-yard line, Pittsburgh ran a bootleg screen pass to fullback Derek Watt and then a fade pass to wide receiver Diontae Johnson. On third down, Pittsburgh finally punched the ball in the end zone on a two-yard run by running back Benny Snell Jr. That third down play was called by quarterback Kenny Pickett, and he talked about the decision behind the play call in his postgame press conference.

Steelers back on top thanks to Benny Snell Jr.

“Coach T puts a lot of confidence in myself, asks me what I like, what I don’t like. I feel like that play, just watching from tape all week, simple play but something I felt like other teams weren’t doing that I think if we had gave it a shot would’ve been successful,” Pickett said via the team’s YouTube channel. “I felt real confident with that play and real happy we got in the end zone.”

As Pickett said, it was a simple play, but it was effective. Out of the shotgun, Pittsburgh spread out the defense with four receivers wide, and Pickett was able to hand it off to Snell for an easy touchdown. Even though Pickett said it was four down territory, the Steelers’ first two play calls weren’t great given that they had the ball on the two-yard line and had yet to attempt a run. Instead of going to a goal line set and bunching everyone up close, spreading out the defense allowed Snell to basically walk in for the two-yard score.

It was a good play call and not something we see all that often from the Steelers near the goal line. Obviously, offensive coordinator Matt Canada loves his receiver jets inside the five, and when the teams runs on the goal line, this year it’s been mostly QB sneaks or straight up the middle with a goal line formation in. Spreading the defense out gave Snell more room to run, and also utilized the receivers as blockers. Looking back at the play, wide receiver Gunner Olszewski got a good initial block that gave Snell just enough of a window to bounce the run outside the tackle without fear of getting stuffed by the cornerback.

I’m sure the touchdown run won’t be the last play that Pickett calls that results in a touchdown. As the rookie matures and his confidence grows, Mike Tomlin and the rest of the coaching staff will have more confidence in his ability to handle the offense and call things on his own as he sees them. While he still struggles with recognition at times (the third-down sack he took that knocked the Steelers out of field goal range late in the first quarter being an example), that’s stuff that he (hopefully) will improve on the more he plays and the more time he spends reading defenses.

Pickett probably played his best game of the season tonight, with an efficient 20-28 for 174 yards and a key two-point conversion on a nice throw to wide receiver George Pickens. If Pittsburgh gets this version of Pickett for the rest of the season, they’ll be a better team in their last six games than they have been so far.