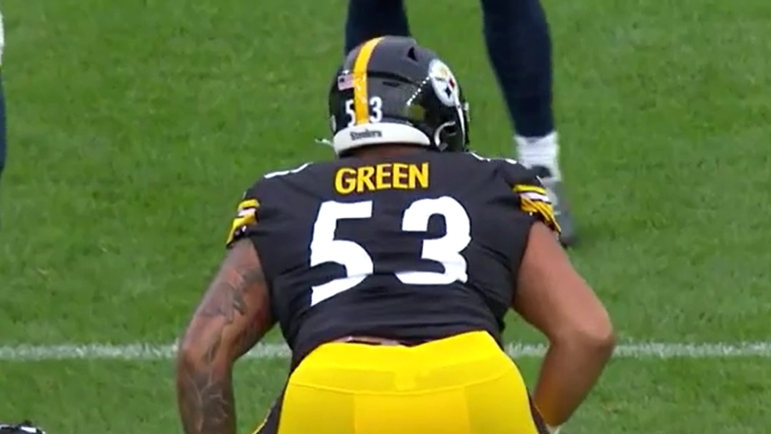 The Pittsburgh Steelers had high hopes for their offensive line this offseason after acquiring two new starters in free agency and anticipating continued growth from their young draft picks. The early portions of training camp seemed to dash those hopes, but the play since the regular season has begun has, largely, been better than anticipated from that point on, or at least better than feared.

While you probably wouldn’t rank them in the top half of the offensive lines around the league, particularly in run-blocking or discipline, the group has stayed the course, and stayed healthy. That has kept second-year third-round pick Kendrick Green not just on the sidelines, but in street clothes, which hasn’t been easy for him.

“Obviously he wants to be in there”, Pat Meyer, his offensive line coach, told reporters earlier this week via the team’s website. “One thing that we’ve been fortunate in is the five that we’ve started, we’ve had the five in there the whole time. We haven’t had the injury bug to where it’s been an issue to have to move different pieces in and out of the puzzle”.

That five consists of Kevin Dotson in the left guard spot at which Green competed this summer, representing the longest-tenured starter with the group minus Chukwuma Okorafor at right tackle. Dan Moore Jr. on the left side is in his second season. Center Mason Cole and right guard James Daniel were their prized free agents.

Green started during his rookie season at center, but their signing of Cole and Daniel (who also has starting experience at center) told you all you needed to know about how they evaluated his play. They hoped that moving him back to guard, where he played almost all of his college football, would get him back on the right track, but clearly it wasn’t enough to win the job, and he’s been the ninth lineman and healthy scratch all year. But he stays plugged in.

“It’s not like he’s got his head down and he’s not working”, Meyer said. “No. He’s working to get better. It’s just we’ve got the five out there right now that’s our five, and we’re gonna continue to run with those five right now until something happens, and we’ll move on from there. But no, he’s been working”.

That doesn’t leave room for Green, who, not amongst the top two centers, thus only has practice experienced specifically at left guard. And if you can only play one or two interior positions, you’re not going to get a helmet unless you start or there’s just nobody else to dress.