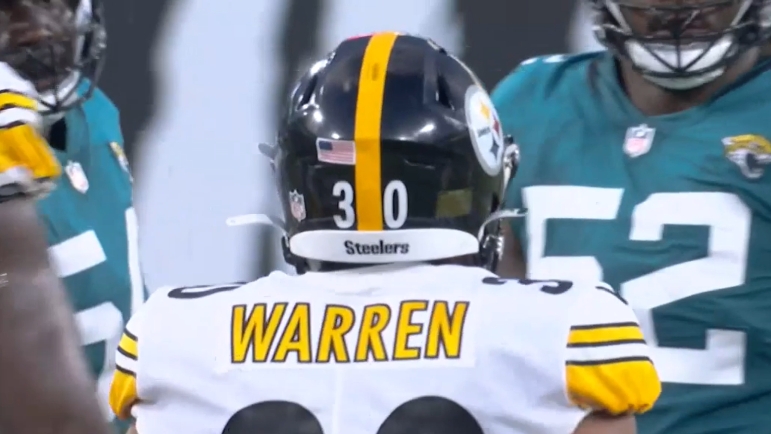 Rookie running back Jaylen Warren has been on a consistent climb since the start of padded practice in training camp with the Pittsburgh Steelers, minus a fumble or two here and there. We now even find ourselves in the middle of the 2022 season having discussions about whether or not he could in time see a starting role over Najee Harris, their second-year, Pro Bowl, former first-round starting runner.

Head coach Mike Tomlin at least expressed openness to the possibility of Warren writing that chapter for himself, acknowledging that the plan moving forward is to continue to tick up his workload. He did see a season-high nine touches in the Steelers’ last game before the bye and has put up good numbers, but while he believes he is capable of shouldering the load, he is focusing on simply doing his job.

“I don’t expect nothing. Whatever they want me to do, I will do. Whatever they feel is best. I will try my best not to disappoint them and help the team win”, he told reporters yesterday, via 93.7 The Fan’s Jeff Hathhorn. “If given, I feel like I can handle it”.

Warren has 29 rushes on the season for 153 yards, adding 12 receptions on 14 targets for another 88 yards. He had yet to find himself in the end zone, and he does have one fumble, but his work in pass protection is also to be commended.

A college free agent signed after the 2022 NFL Draft out of Oklahoma St., having also previously played at Utah St. and Snow College, Warren knows better than to take for granted that anything will be handed to him. At the end of the day, he told reporters, “I understand my role on the team”.

And until otherwise noted, that role is to serve as the complementary back to Najee Harris, who has had his share of struggles through the first half of the season. How much of that can be contributed to an under-reported Lisfranc foot injury is unknown, even evidently to Tomlin. But he is prepared for anything.

“If my role increases, it would speak for itself”, he said. “I’ve been the one that has had to prove his spot. That’s nothing new to me. If I got it cool, if I didn’t it is what it is. I didn’t want to look back and say I could have done more”.

It should be said that Warren is not the type of player about whom you can just look at a stat line to get a feeling for who he is. Watching him play reveals his character, and that has clearly not gone unnoticed, either in the locker room or in the coaches’ meetings. What comes next, time, and the tape, will tell.