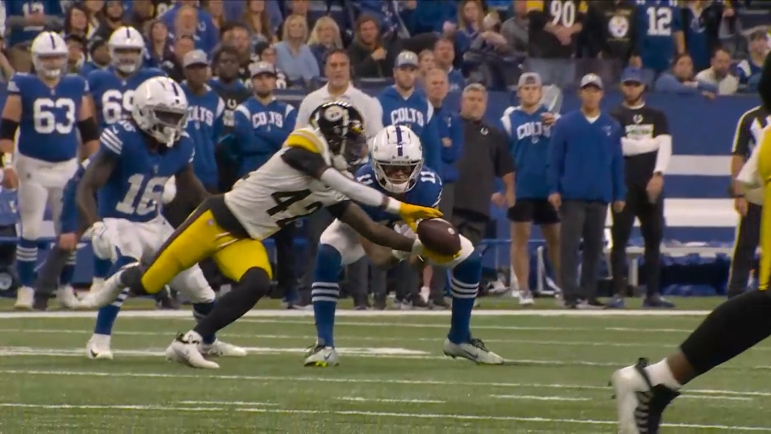 The Pittsburgh Steelers were plus-two in the turnover category last night. Even if one was a freebie, the first was an excellent play by an unheralded contributor. In part due to injuries, third-year cornerback James Pierre got some burn in the game, and he came away with a dazzling interception in the first half that served as a catalyst for the defense. At least that’s how outside linebacker Alex Highsmith saw it.

“That was great. I was rushing, turned around and great catch, great play”, he said after the game about Pierre’s interception, via the team’s YouTube. “Just happy for him coming in and making a play like that. But it really just started us off, really got us a lot of momentum that first half, the way we played. Huge play by him”.

It was the second interception of Pierre’s career, the first coming last season in a start against the Jacksonville Jaguars. He had just given up a late touchdown that allowed Jacksonville to hang around, but was able to make a game-sealing interception in the end zone on the final drive.

Last night’s interception was far from a death knell for the Indianapolis Colts—indeed, they would ultimately erase a 13-point deficit, only to squander it again—but it was an important for both sides of the ball. Even if the results weren’t immediate.

The interception gave the offense the ball at the Colts’ 38. They ended up back on the 38 despite getting a first down, after quarterback Kenny Pickett took two sacks in a three-play sequence beginning at the Colts’ 24-yard line. The dual sacks—the last a bad one on his part missing the hot read for a 12-yard loss—pushed them out of comfortable field goal range and forced them to punt.

The defense, however, continued to be on fire. They held the Colts the three and outs on their next two possessions, and limited them to under 80 yards of offense for the half, with only a field goal to show for their efforts.

The offense scored on three straight possessions after that initial failure on the short field, adding up to 13 points. They unfortunately stalled in the red zone on their final possession of the half, however, and the entire team in every phase failed to carry any of that momentum into the second half.

As mentioned, they blew the 13-point lead they held at halftime, ultimately trailing 17-16 before the offense put together one significant drive at the top of the fourth quarter, traversing 75 yards (aided by a 15-yard roughing the passer penalty) to punch it into the end zone courtesy of some Benny Snell Football™.

For the Steelers this year, any takeaway is a celebration, frankly. The splash plays haven’t come the way they’ve become accustomed to, at least not since the season opener, so it’s no surprise that that early interception was so emotionally significant. Even if its effect didn’t run them through to the end of the game.