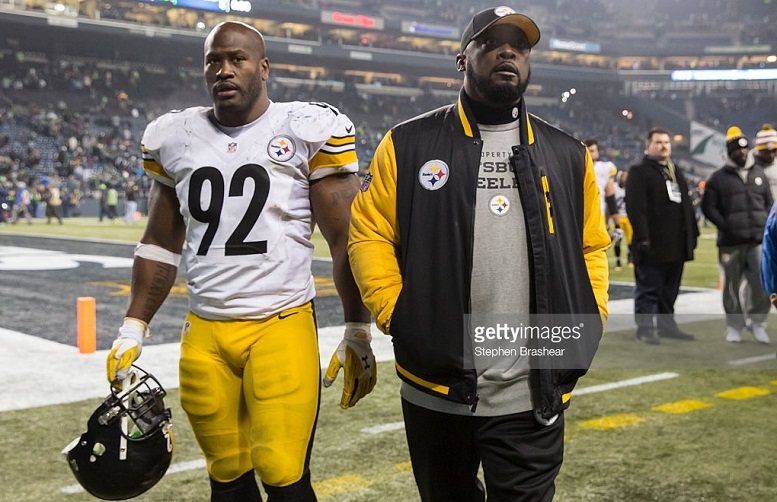 If you happen to play a direct role in the changing of the rules within a game, chances are you’re a Hall of Fame talent.

That’s what former Pittsburgh Steelers outside linebacker James Harrison has on his resume, much like former Steelers great and Pro Football Hall of Famer Mel Blount. Blount, of course, had the “Mel Blount Rule” implemented in 1978 that barred contact with wide receivers beginning five yards beyond the line of scrimmage, a rule that helped mark a turning point in the game that began to skew more heavily to an open passing attack.

Harrison was such a violent, physical player that he forced the league to change the rules, making it even harder to play defense while trending more toward player safety. While that was ultimately the right call, the league needed a poster child for the changes, and Harrison was that during the height of his dominance.

For that alone, Steelers head coach Mike Tomlin, who coached Harrison for 11 seasons in the black and gold, believes that Harrison, who is one of 28 players named a semifinalist for the Pro Football Hall of Fame’s Class of 2023, has credentials worthy of a Hall of Fame selection.

Harrison was the poster child for the changes thanks to his run in 2010 that saw him fined more than $120,000 for hits leveled on the field, including hits on Buffalo’s Ryan Fitzpatrick, Tennessee’s Vince Young, Cleveland’s Colt McCoy, and Cleveland wide receivers Mohammed Massaquoi and Josh Cribbs. The hit on Massaquoi and the subsequent fallout landed a cover on Sports Illustrated during the 2010 season, putting Harrison in a negative spotlight.

Still, that stretch of play, which ultimately helped usher in the player safety initiative, it doesn’t stain his reputation overall. During his time in the NFL, which included being cut multiple times by the Steelers and Baltimore Ravens before catching on with the black and gold for good in 2004, Harrison won the NFL’s Defensive Player of the Year award in 2008, was named a First Team All-Pro twice (2008, 2010) and a Second Team All-Pro twice (2007, 2009). Harrison was also a five-time Pro Bowler from 2007 through 2011 and retired with 84.5 career sacks, 811 total tackles, 34 forced fumbles, nine fumble recoveries, eight interceptions, one touchdown and two Super Bowl titles.

Harrison does have one of the greatest plays in Super Bowl history with the 100-yard pick-six right before halftime against the Arizona Cardinals in Super Bowl XLIII as well.

According to Pro Football Reference’s handy Hall of Fame monitor metrics, Harrison has a HOFm score of 74.93, putting him right between Hall of Fame outside linebackers Dave Robinson (74.35) and Rickey Jackson (76.18). From his era alone, he trails DeMarcus Ware (96.83) and Terrell Suggs (94.30) in large part due to the sacks. Ware had 138.5 for his career, while Suggs had 139.0. Still, Harrison has the leg up in individual awards with the Defensive Player of the Year hardware.

“His willingness to engage, his willingness to combat people. The butt-kicking component in this game will never go away,” Tomlin stated. “It’s above schematics. It’s above the ‘evolution of the game.’ You get a bunch of tough guys who don’t lose one-on-one battles, you have a chance to have a good football team. And he really exemplifies that.

“I haven’t been around a football player who I can definitively say is tougher than James Harrison. Maybe we can have conversations about people who you would say, “might be as tough as” … but there are zero people, when I think about toughness and who I’ve been exposed to – the poster boy is James Harrison.”