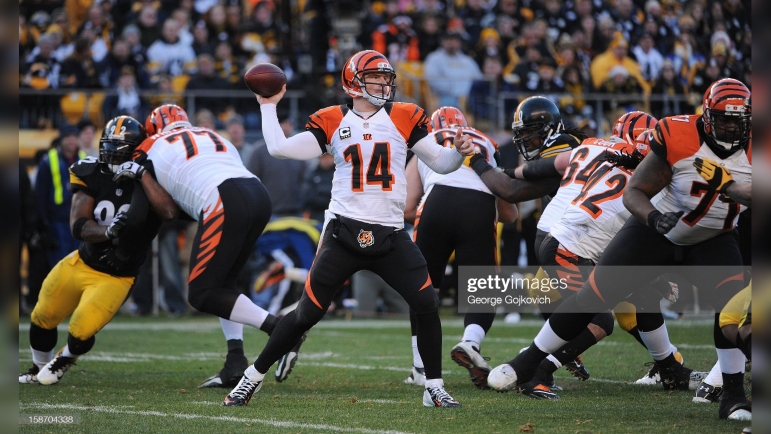 The Pittsburgh Steeler may very well have the best pass rusher to ever play —and who ever will— for the franchise on the roster right now in the form of sixth-year outside linebacker and reigning Defensive Player of the Year T.J. Watt. But he’s far from the only great pass rusher they’ve ever had.

Indeed, Watt only just captured the club’s single-season sack record just last season, even if he did effectively put it out of reach, surpassing James Harrison’s mark of 16 set in the Super Bowl season of 2008. Watt is likely to soon claim Harrison’s franchise all-time sack record as well.

But that doesn’t take away from Harrison’s greatness at his height. He was quite possibly the best defender in the game himself during about a five-year period or so, earning Defensive Player of the Year honors in 2008. And former Cincinnati Bengals Pro Bowl left tackle Andrew Whitworth, now retired, can attest to that.

“During the game, he was just ferocious and he’s just smashing you every play,” he told Cameron Heyward yesterday on the latest episode of his Not Just Football podcast, in speaking about the matchups he would go up against with Deebo over the years.

“When I go back and think of the guys I got to play in my career, you play some special guys that you could say in certain situations they’re good players, whether it be rushing the passer or playing the run,” he said. “But I always put James and Terrell Suggs in a pretty rare category.”

Suggs is, of course, now retired as well. Another former Defensive Player of the Year and another two-time Super Bowl champion like Harrison, perhaps the biggest thing they don’t share in their career is Suggs’ longevity as a starter—226 starts to 117.

“They played every down of NFL football the same way,” Whitworth described of going up against two of the best edge defenders in the game four times per season in AFC North play. “They were dominant in the run game, they dominated in the pass game. Just very few guys like that that dominate every facet of football, really, and were really good at all of the above.”

A second-round pick by the Bengals in 2006, Whitworth played in the AFC North for his first 11 seasons, making 164 starts in Cincinnati before departing in free agency to sign with the Los Angeles Rams. He retired at the age of 40 after this past season once he finally landed his own Lombardi Trophy.

Although he was a starter almost from day one, like Harrison, it took time for the league to catch up with and appreciate what he was doing. He did not make a Pro Bowl for the first time until his seventh season, and then not again until his 10th, in spite of the fact that he had already been a high-performing player. Perhaps having to play against the likes of Harrison and Suggs so often had something to do with that—or perhaps it was just because he mostly played on bad teams.