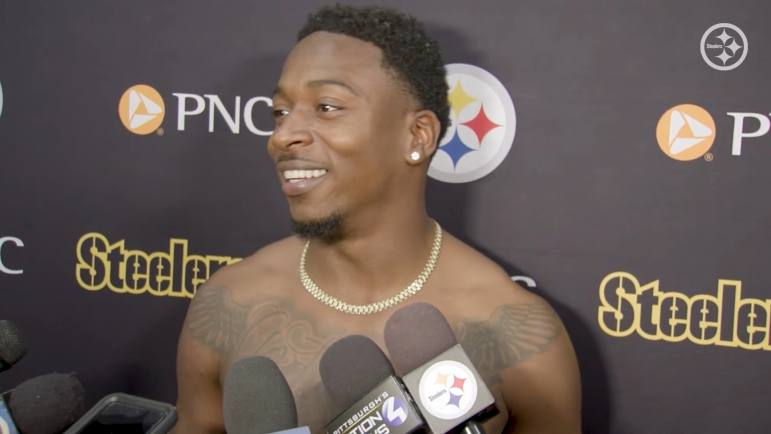 The Pittsburgh Steelers were likely thrilled to have the opportunity to score veteran safety Damontae Kazee this offseason shortly after the 2022 NFL Draft at a budget price. He was cited as two of the three safeties they were pursuing—the others being Terrell Edmunds and Tyrann Mathieu—as a potential starter, so to have him as depth and as a role player was extremely tempting.

Thanks to a fractured wrist suffered in the preseason, they, unfortunately, had to do without him for the first half of the season, but he is ready to return to finish out the back slate, his arm all screwed up—literally—to protect himself from further injury.

Neither that nor the time missed will slow him down. At least that’s his position. He has no concerns about being able to hit the ground running at the first opportunity. “Of course I could”, he told reporters via the team’s YouTube channel. “The way I play is I’m full speed every play, so that’s me at the end of the day. You’re gonna get full speed every play”.

Originally drafted in the fifth round in 2017 by the Atlanta Falcons, Kazee has been a full-time starter for the past four seasons, though he missed most of the 2020 season due to injury. He signed with the Dallas Cowboys as an unrestricted free agent last season and started 15 games with two interceptions and two forced fumbles.

He has 12 picks in his career, however, including a league-leading seven in 2018, and he was also a ballhawk in college. He recorded 15 interceptions combined in his final two collegiate seasons at San Diego State, which helped put him on draft boards. He knows that’s his calling card.

“I beat a couple records with the ball starting with college and stuff”, he acknowledged in discussing his role as a playmaker. “Everybody knows me as a ball guy, so at the end of the day, I gotta be a ball guy. I gotta do what I gotta do to get the ball”.

The Steelers have struggled to do just that for most of the season. They have eight interceptions as a defense on the year, which still surprisingly ranks sixth-most in the league, but they have only four since week one.

Free safety Minkah Fitzpatrick accounts for three of their eight total interceptions, including half of the four they have mustered in the past seven games. Cameron Sutton has two, and Ahkello Witherspoon, Levi Wallace, and T.J. Watt each have one.

This is where Kazee knows he has to come in and try to make a difference. For an offense this fragile and with such a small margin for error, every extra possession, and any advantage in field position, is potentially a big deal.