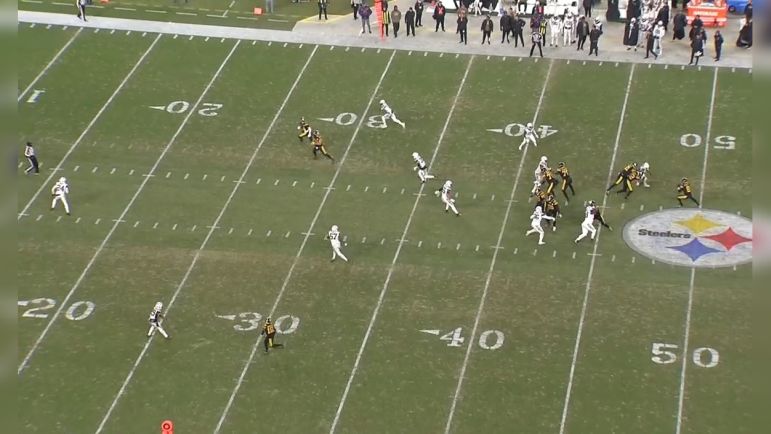 A failed flea flicker helped turn the tide of the Pittsburgh Steelers’ 37-30 loss to the Cincinnati Bengals last weekend. But Mike Tomlin says he doesn’t live in his fears nor does he have regrets, praising the principle of the playcall during his weekly The Mike Tomlin Show that aired Saturday on the team’s YouTube channel.

“I thought it was awesome to be quite honest with you,” Tomlin told host Bob Pompeani. “The time in which we did it, we did it after an earned first down. Oftentimes we were working at pace in those scenarios with pacing to a base run play. And so that’s what the flea flicker set up.”

The play came one snap after George Pickens’ 33-yard deep ball completion in the fourth quarter. The Steelers were down just 27-23 with the ball on the Bengals’ 39. Pittsburgh went for the killshot, running a flea flicker the very next play. But it was clunky, Najee Harris’ pitchback off-line, and Pickett, feeling pressure, threw the ball away. Tomlin says had it been executed as planned, it would’ve gone for a home run.

“The pitch back was a little bit off target. Kenny P had to adjust and make the catch that pulled him off his landmark and didn’t allow him to get the ball out of his hands on time. Had he got it out on time, Pickens was running five yards behind their secondary.”

Check out the play below.

As Tomlin says, these moments are often results-oriented. If it works, you’re a genius. If not, you have egg on your face. It was obvious to see what Pittsburgh was attempting to do. Big play, push tempo, catch the Bengals off-guard and vulnerable. It didn’t work out, a statement that can be applied to virtually everything Pittsburgh did in the second half, netting only three points until their final, semi-meaningless drive. The Steelers’ offense made progress, scoring a season-high 30 points, but have been unable to put together a 60-minute game this season. Tomlin understands the criticism that comes with any playcall that fails for coaching or personnel reasons.

“I never worry about the judgment. Judgment is based on whether or not plays work or not. It was a quality play, a good opportunity.”

Missed opportunities were the theme of the final 30 minutes of that game. Everything went wrong after that moment, the Steelers’ ending that possession with a punt and missed chance to make it at least a one-point contest. From there, the team lost two yards on second down and followed that up with a third down Pickett sack, sending out the punt team. It was a similar story on the following possession, going from 1st and 10 on the cusp of field goal range to another drive that ended in a Pressley Harvin punt.

Perhaps there will be more margin for error in Monday night’s game against the Indianapolis Colts with their 31st-ranked scoring offense. Still, the Steelers need to play as clean a game as possible to support their own struggling 3-7 squad. Tomlin says the approach remains the same going forward.