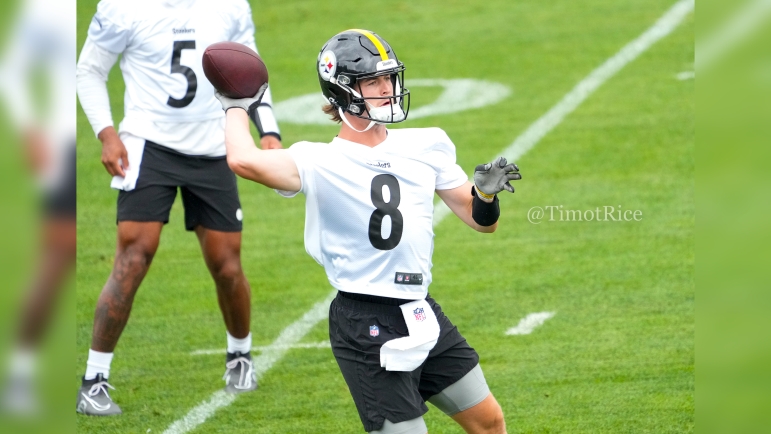 The Pittsburgh Steelers have no shortage of great quarterbacks throughout their decorated history. From four-time Super Bowl champion and Hall of Famer Terry Bradshaw to the recently retired two-time Super Bowl champion Ben Roethlisberger, the franchise’s great quarterbacks have played a big role in winning their league-leading six titles. As such, Kenny Pickett, the team’s first-round rookie quarterback who was drafted after Roethlisberger’s retirement, has big shoes to fill. While the verdict is still out on Pickett, Bradshaw had no doubts that he is the Steelers’ guy when asked about the rookie quarterback on Friday’s episode of Fox Sports’ The Herd with Colin Cowherd.

“I watched him all four years at Pitt,” Bradshaw said when asked about the Steelers’ rookie quarterback. “I loved him. When Pittsburgh drafted him, I said it was a perfect match. Is he a super A talent? No, but he is an upper-echelon B. I think they have their guy. He almost has the ‘it’ thing. And I think if you can not have the ‘it’ thing and get the ‘it’ thing, he’s the guy that can get it. Once they put some pieces around him.”

As a rookie quarterback playing for the Steelers, perhaps no endorsement is as significant as Bradshaw’s. Indeed, Bradshaw had a Hall of Fame career and is one of three quarterbacks to ever win four or more Super Bowls as the starter.

It is hard to argue against Bradshaw’s point about Pickett not being an elite A-level talent. Some names that come to mind in that echelon are Buffalo Bills’ quarterback Josh Allen and Kansas City Chiefs’ quarterback Patrick Mahomes II. While Pickett arguably does not possess that top-tier level of athleticism or arm talent, he is plenty capable nonetheless.

“I think the Steelers have got their guy,” Bradshaw continued. “And here’s the key for me: you don’t have to have [an elite arm], you can have an arm like Billy Kilmer. As long as you can stand in that pocket and read coverages and not panic. And he does, he does all of that.”

Pickett already has a few highlight plays that fit Bradshaw’s description. This dates back to his first game action against the New York Jets in Week 4 when he delivered a perfect throw to tight end Pat Freiermuth after taking a hit. After the game, he stated that making said throws is “part of the job description,” and has continued to do so.

There is no shortage of top-level quarterbacks in NFL history that did not possess elite talent. A notable example is Tamps Bay Buccaneers’ quarterback Tom Brady, a pure pocket passer that ran a 5.17 seconds 40-yard dash. While this is not to say that Pickett will have a Brady-esque career trajectory, Bradshaw’s claim that elite talent is not a requisite to become a franchise quarterback holds merit.

The fact is, however, the verdict is still out on Pickett, and will be for some time. His rookie season has been up-and-down, as is natural for young quarterbacks. While it isn’t the worst rookie quarterback season, it also isn’t the best, and only time will tell whether Pickett is the Steelers’ franchise guy.