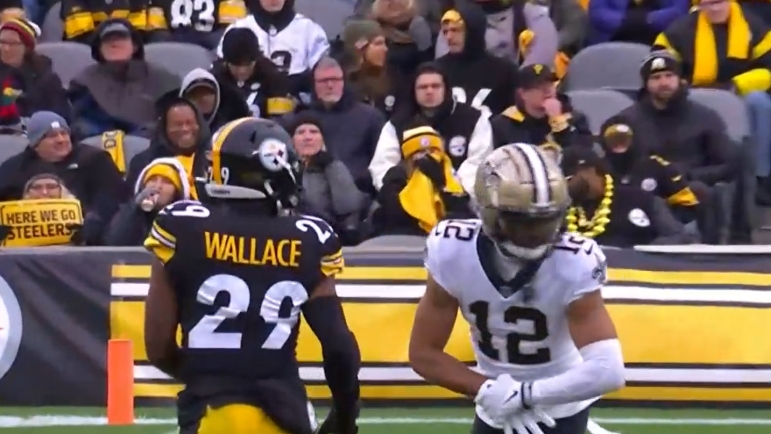 Pittsburgh Steelers head coach Mike Tomlin likes to say that the best ability is availability. Perhaps it’s more of a prerequisite state than an ‘ability’, so to speak, but the point is well taken. It’s good to have, but it doesn’t hurt to have ball skills, either.

Cornerback Levi Wallace was able to combine the two better than he has all season this past Sunday in a winning effort over the New Orleans Saints. In a season dogged by injuries and missed opportunities for interceptions, he got the start while others have been injured and helped deliver multiple takeaways.

His own interception in particular is one to be proud of, a combination of knowledge and just a bit of daring and self-confidence. As he explained to Mike DeFabo of The Athletic, he knew that in the game situation, he could bait the Saints and quarterback Andy Dalton to throw long if he pressed at the line of scrimmage.

“I kind of just took a risk there, knowing they were going to run a go route and just knowing how good I am at playing the go route,” he said. It was 3rd and 9 for New Orleans on their own 39, already down 20-10 at that point with under five minutes to go in the fourth quarter.

According to DeFabo, Wallace said that he read wide receiver Kevin White’s split and, based on the down and distance, the score, and the timing in the game, he judged that a go route would be coming if he pressed, or a stop route to the line to gain if he didn’t.

He chose to set the bait and trust in his own abilities to make a play, and you already know that it worked out. We wouldn’t even be talking about it if it didn’t, but you can see it unfold below. The Saints ran just a three-man route with the two exterior receivers running go, the slot slanting in about eight yards deep.

Arthur Maulet probably got away with a hold over the middle, but Dalton never even looked that way. With Terrell Edmunds on the far hash and Damontae Kazee playing in, the quarterback only ever looked in one direction on the play. It was ‘go’ time.

Precisely what Wallace was hoping to see. And while the ball was somewhat underthrown, the veteran put himself in a good position to make the play, on the receiver’s hip throughout the route while able to use the receiver’s body language to decipher what was coming.

Plays like these contain a lot of important details that tell you how much knowledge and not just physical athletic ability is integral to achieving success in the NFL. And something like this—reading a receiver and knowing the down and distance to predict a route—is actually quite tame in that regard.