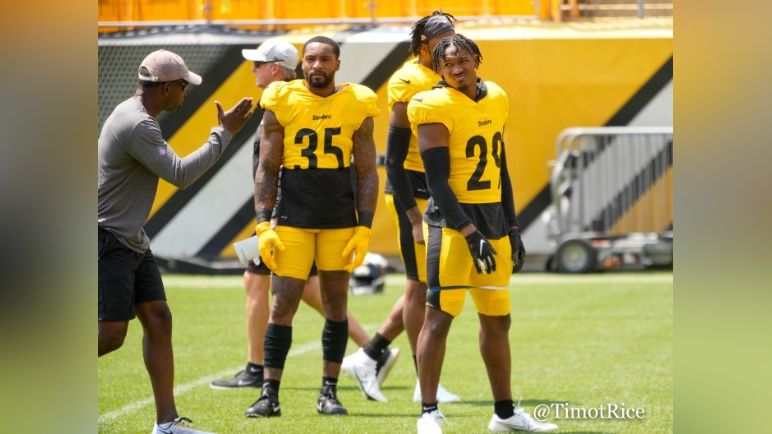 But they are hoping to develop that quality in the second half of the year, and defensive backs coach Grady Brown believes competition is the ticket. He addressed that subject via the team’s website in discussing the imminent return of one of his own, safety Damontae Kazee, from the Reserve/Injured List.

“Anybody that’s available always provides competition”, he told reporters last week. “Competition heightens effort, and when you play with a heightened effort every day in practice, it will affect the way you play in the game on the weekend”.

“As many bodies as we can get in the room that’s healthy, that’s gonna provide competition, because we’re all men, we’re all competitors, everyone wants to play, and there’s a limit on how many hats you can get in a game”, he added. “If we can get as many bodies healthy every day competing at a high level, we’ll have great practices, and that will prepare us to play well”.

Provided that they activate Kazee this week, and that it doesn’t come at the expense of another defensive back, that will give them 11 in total. There is a good chance, however, that he will take the spot of cornerback Josh Jackson, who was on the practice squad until defensive lineman DeMarvin Leal was placed on the Reserve/Injured List.

Even so, they would then have Minkah Fitzpatrick, Terrell Edmunds, Kazee, Tre Norwood, and Miles Killebrew at safety, along with Cameron Sutton, William Jackson III, Ahkello Witherspoon, Levi Wallace, James Pierre, and Arthur Maulet at cornerback.

Given the versatility of players like Sutton, Norwood, and Kazee, there are a number of things the Steelers could do to get different looks and different combinations of players on the field. And Kazee in particular is a big addition as a six-year veteran starter.

I do appreciate Brown’s comment that they are focusing on getting onto the field who is playing the best, rather than necessarily worrying about in what combination or about who is supposedly the best, on paper.

What the Steelers need to concern themselves with right now is playing the guys who are going to contribute positively to winning efforts, at least more than the other alternatives. I think Kazee can be one of those guys.