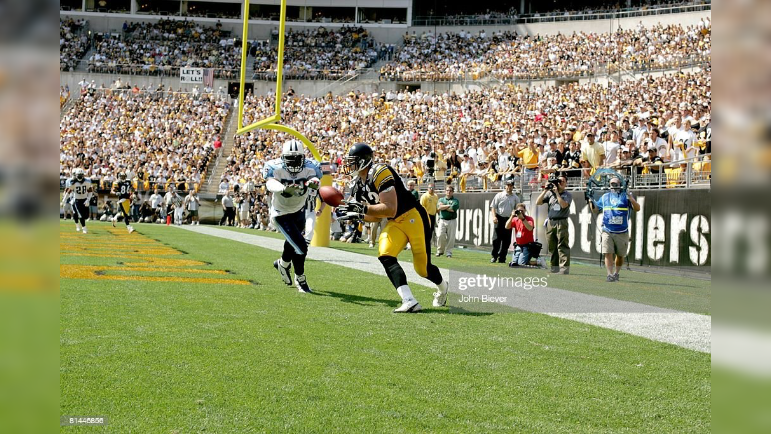 Coming off of a 15-1 season that ended in heartbreak in the AFC Championship Game against non other than the New England Patriots at then-Heinz Field, the Pittsburgh Steelers found themselves picking late in the first round of the 2005 NFL Draft.

There, the Steelers were fortunate to land Mackey Award winning tight end Heath Miller out of the University of Virginia with the 30th overall pick.

Of course, Miller went on to have a remarkable 11-year career in the black and gold, becoming one of the very best dual-threat tight ends in football as a great blocker and a clutch receiver during his time in the Steel City. That all led to his induction into the franchise’s Hall of Honor as part of the Class of 2022, which was officially inducted during the Week 10 halftime ceremony against the New Orleans Saints at Acrisure Stadium.

During his week back in Pittsburgh leading up to the ceremony, Miller had the chance to reminisce with media members and former teammates — including Ben Roethlisberger — on his playing days. During a one-on-one sit-down with Steelers.com’s Bob Pompeani, Miller recalled some of the pressure he faced as a rookie stepping into a team ready to compete for a Super Bowl right away, and all that brought for the then-rookie.

“I knew I had to get my stuff together and not mess up. They were 15-1 the year before and there was just so many great players on that team,” Miller said to Pompeani regarding his rookie season, according to video via Steelers.com. “I didn’t want to let the team down, didn’t want to let those guys down because a lot of those guys were on the back end of their career and this was their opportunity to finally win a Super Bowl.

“So when I stepped in the huddle, I knew it was a good kind of pressure and that I needed to meet the standard that was expected and earn their trust and respect.”

Entering the 2005 season, the Steelers were ready right then and there to win. Roethlisberger was entering his second season and was coming off of the NFL’s Rookie of the Year award after going 13-0 as a starter. Along with Roethlisberger, the Steelers still had a great offensive line featuring Pro Football Hall of Famer Alan Faneca and standouts Kendall Simmons, Jeff Hartings and Marvel Smith, not to mention Max Starks.

Hines Ward was the ever-reliable wide receiver as well, along with Willie Parker and Jerome Bettis at running back.

The first career NFL catch made by TE Heath Miller came in Week 1 of the 2005 season against the Titans,. It was a 3-yard touchdown reception from QB Ben Roethlisberger. It was his only catch of the game. #Steelers pic.twitter.com/aW77oe9Yym

That group was loaded, and though they struggled early on, the Steelers eventually found their footing and ripped off eight straight wins to win Super Bowl XL in Detroit over the Seattle Seahawks, sending Bettis off into retirement in his hometown with that ever-elusive Super Bowl title.

For Miller though, that season brought good pressure and forced him to live up to the standard and earn the veterans’ respect. He was able to do that as a rookie, finishing with 39 receptions for 459 yards and six touchdowns in the regular season before adding seven receptions for 107 yards and a score in the playoffs, catching a touchdown pass in the win over the Indianapolis Colts in the divisional round.