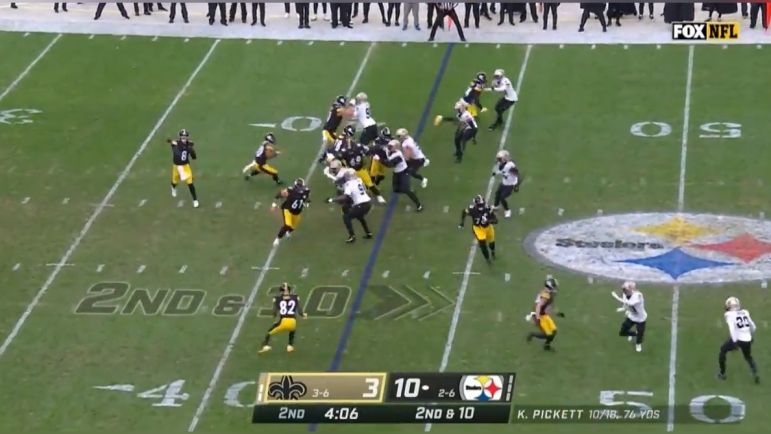 I’ve been as critical of Matt Canada as anyone. But over the last month, the issues that have plagued the Pittsburgh Steelers’ offense have been more personnel and execution problems and less so on the schematics or gameplan. In Sunday’s showing against the New Orleans Saints, Canada had a couple of solid playcalls as Pittsburgh had its best offensive performance of the season.

But to understand that first, you have to go back to Week 8. 1st and 15 on the Steelers’ 12-yard-line. Canada wants a slot screen to Sims. The whole line pulls out in space to block but the defender reads and blows it up, dropping Sims immediately for a three-yard loss that soon leads to a Steelers’ punt.

So Canada went in and tweaked it. Against the Saints, he added a wrinkle by pulling RG James Daniels to help sell run and not make the screen look so immediately obvious with all the linemen pulling out. Linebackers often key the guard and that helps them take the cheese, flow with Daniels instead of getting out in space for the slot screen. This isn’t an RPO or packaged play. This is a well-designed and intended screen pass.

Sims quickly gets the ball and gets upfield. With good blocking in front, this one picks up 15 yards. Watch below and see the differences. You can see it especially well from the end zone view.

1. Sims stacked in a bunch set to force the CBs to play off, making it harder for one to trigger downhill and blow it up.

2. Sims taking steps upfield to initially sell a route before retracing his steps and tunneling on the screen

3. The run fake to the RB to freeze the defense and sell run.

4. The action of the RG to hold and influence the linebackers

The only concern here is that Pittsburgh could’ve been called for RT Chukwuma Okorafor illegally being downfield. But the refs didn’t and the play counted.

Several tweaks add up to far better results. In part, that’s what the bye week offers. A chance to self-scout, reevaluate, understand your own tendencies and how teams play you, and build off that. Sure, you can be a little frustrated about these issues happening in Week 8 but it’s progress.

My goal is to be fair to Canada. I’ve generally been critical because it’s been warranted but he has been better the last several weeks. Overall offensive output remains an issue, this offense can’t seem to break the 20-point barrier, but those have been more on the players executing poorly as opposed to me pulling my hair out watching Canada call this offense. And that’s shown in moments like this with quality adjustments like this one to help create much better results.