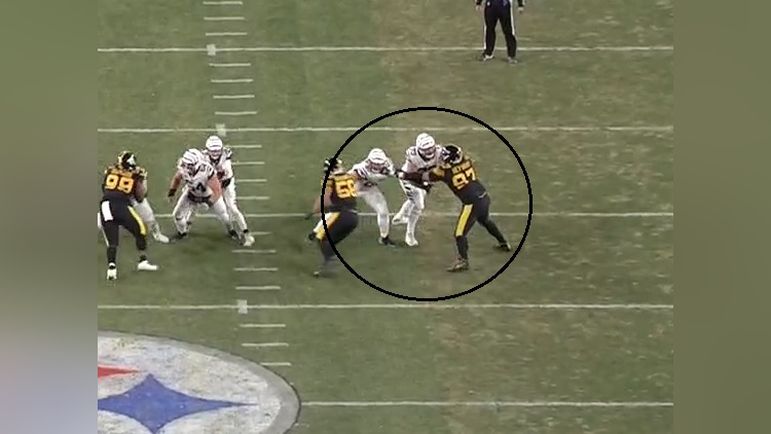 You sneaky, sneaky man, Cam Heyward. His veteran status doesn’t just get him a graying beard. Over the years, he’s learned the tricks of the trade and if you watch closely, you’ll see them on tape. While he’s rightfully lauded for his powerful bull rush and fanatical effort, both things on display in Sunday’s loss to the Cincinnati Bengals, so was something else.

We’ve noted it before but Heyward is the king of stunts. And he gets a little grabby to get the job done. Twice in Sunday’s game, Heyward used that veteran craftiness to free up Alex Highsmith twice in the game.

What Heyward has mastered is the subtle art of the defensive hold. As the crasher on stunts with the ROLB/RDE serving as the looper into the A gap, Heyward will slyly grab and hold the LG so he can’t slide down and pick up the looper. In essence, Heyward occupies both blockers and leaves his EDGE friend with a free path to the quarterback.

Let’s take a look at what I’m talking about. On Highsmith’s half-sack, he and Heyward are running a T/E stunt. Heyward is the crasher and first to “go” on the stunt, crashing into the B gap between LT and LG. For the o-line, the guard is supposed to pass off the crasher – Heyward – to the left tackle while taking the looper, Highsmith. But Heyward uses his left/inside arm to grab the middle of the LG’s jersey and prevents him from being able to take on Highsmith. 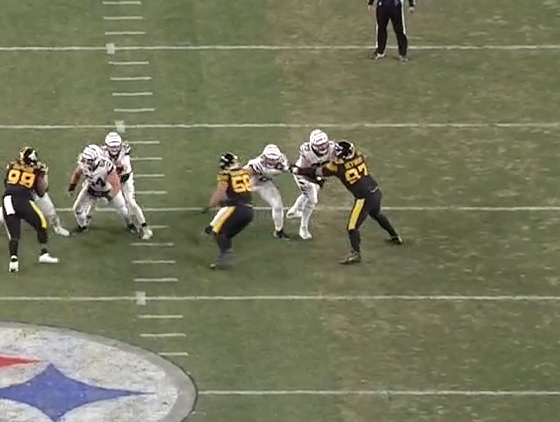 With the center sliding away, Highsmith has a free path to Joe Burrow and he and T.J. Watt combine to take him down. Watch the whole play. I’ve slowed it down so you can see what Heyward does.

Same thing later in the game. Identical stunt. And Heyward again grabs the LG to prevent him from sliding to the looping Highsmith. Here’s a snapshot of it. 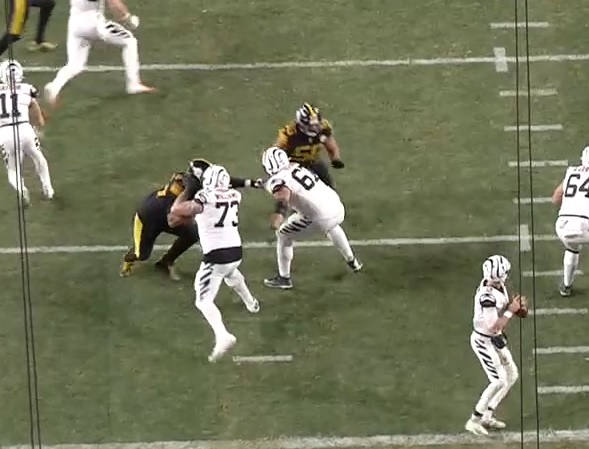 And here’s the whole play. Highsmith is again free and barrels down on Burrow, forcing the throw that falls incomplete and allows the Steelers’ defense to get off the field.

Is this a hold? You bet. Is it going to get called? Probably not. Heyward does a tremendous job of making it subtle. Hands inside, not an exaggerated pull and with the referee now behind the offensive line instead of facing his old position of being behind the linebackers, he has a much tougher time seeing the holding action.

By the second time he did it, the LG, rookie Cordell Volson, was pretty upset, throwing his hands up into the air. But when you’re a rookie facing a veteran like Heyward who knows what he can get away with, it’s highly unlikely there’s going to be a flag. And when you’re a vet like Heyward, who has done this before, you know all the small things to gain an edge for you and your teammates. He’s done with the same with Bud Dupree and know he’s doing it with Highsmith.

And if you’re angry at me for pointing this out, know I’m not the only one. And you can bet that’s what Volson was telling his coaches – who will probably eventually alert the refs – after looking like the bad guy on those plays. I’m sure the person happiest to not see Cam Heyward again is Cordell Volson, who didn’t fare well in his two games against Heyward this year.