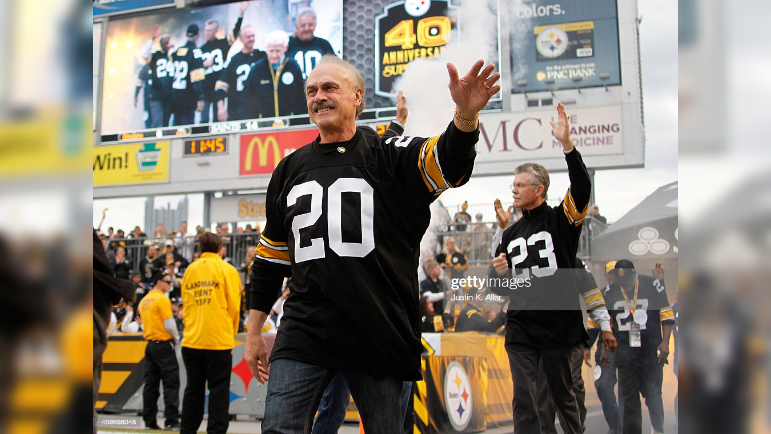 Just over 53 years ago, Robert Patrick “Rocky” Bleier found himself a world away from the game of football, lying face down in a rice paddy in Hiep Duc in South Central Vietnam after being struck in the leg by a bullet while on patrol.

Bleier, who spent 1968 as a member of the Pittsburgh Steelers after being drafted in the 14th round of the 1968 NFL Draft out of Notre Dame, was drafted into the U.S. Army on December 4, 1968, during the Vietnam War. He later volunteered for duty in South Vietnam and shipped out for Vietnam in May 1969 assigned to Company C, 4th Battalion (Light), 31st Infantry, 196th Light Infantry Brigade and assigned as a squad grenadier operating a 40mm M79 grenade launcher.

A few months later, that’s when he found himself under fire with a bullet in his leg alongside his fellow soldiers in that rice paddy in Hiep Duc, moments away from his life changing forever.

Injured and under fire, Bleier was later seriously wounded by a grenade that exploded as he attempted to jump over it, sending shrapnel into his leg and seriously injuring his right foot, eventually landing him in a hospital for six weeks in Tokyo. While in that hospital bed, after being told he’d never play football again by doctors, a simple letter from Steelers owner Art “The Chief” Rooney changed his life for the better.

“Rock – the team’s not doing well. We need you. Art Rooney” the letter read. The Steelers, in a sense, were asking for help.

That’s when Bleier stepped into the void, worked his way back onto the field and helped shape the future of the Steelers, lending a helping hand — or two — on the way to four Super Bowl championships after being discharged from the U.S. Army in 1970.

All these years later, Bleier has lent that helping hand wherever needed, especially to veterans, a select, special group of men and women that share a common bond with Bleier, even if they’ve never met the man who went on to achieve stardom with the black and gold, becoming a folk hero for his comeback story from the injuries he suffered in the war, eventually becoming a star on the gridiron again.

“I didn’t know what my life was going to be like after that,” Bleier said in an exclusive interview with Steelers Depot ahead of Veterans Day. “It wasn’t a conscious effort on my part [to be involved with veterans]. It was kind of the time and place in which I was present.”

That helping hand continues to this day with the National Veterans Foundation, an organization that Bleier is a prominent honorary board member of and an ardent supporter of dating back to 1985 when the NVF was founded by Shad Meshad.

“What was appealing about what Shad was trying to accomplish, was that he was in Vietnam as a psychiatric social worker, in a sense, and was there helping veterans who were in the middle of the war, and then of course afterwards,” Bleier added. “What really enticed me to get involved was his passion for veterans. He’d work the streets. He’d see a homeless vet and he’d get them help right away, finding them a place to stay, a job, whatever it might be.

“It was that type of passion, and it still is today, that hands-on type of interaction with veterans that continues to drive NVF.”

Ahead of Veterans Day Nov. 11, Bleier and the NVF need help from Steelers fans across the country in helping support veterans and providing a helping hand to those in need that served their country admirably.

According to the official website NVF.org, the National Veterans Foundation’s mission is to serve the crisis management, information and referral needs of all U.S. Veterans and their families through: Management and operation of the nation’s oldest toll-free, vet-to-vet helpline for all Veterans and their families; Public awareness programs that shine a consistent spotlight on the needs of America’s Veterans; Outreach services that provide Veterans and families in need with food, clothing, transportation, employment and other essential resources.

Where NVF makes its biggest impact though is through the Lifeline for Vets hotline, which serves as a last resort of sorts for veterans of all eras, their family members and active duty service members, some while serving overseas in combat deployments.  The Lifeline for Vets assists Veterans with needs including medical treatment, PTSD counseling, VA benefits advocacy, food, shelter, employment, training, legal aid, suicide intervention and more, according to NVF.org.

On the heels of the War in Afghanistan, the longest war in American History, the need for the National Veterans Foundation has never been greater.

Additionally, about 7% of Iraq and Afghanistan veterans are unemployed, and an estimated 50,000 veterans are homeless on any given night.

On top of those grave numbers, 17 veterans a day, men and women, commit suicide.

That’s where the NVF and the Lifeline for Vets come into play. The lifeline is non-governmental, provides a proven Vet-to-Vet service model, and gives veterans a referral source that provides local and national, situation-appropriate solutions for a host of problems veterans face.

Lifeline for Vets counselors has at their fingertips one of the most comprehensive databases in existence of local, national, community-based, and government resources. Veterans can call the Lifeline for Vets and receive help with financial problems, mental health issues, receiving their VA benefits and healthcare, employment, housing, family counseling and many other issues.

That’s quite appealing for veterans, according to Bleier, and helps meet some of the biggest needs for veterans now and moving forward.

“The biggest needs are awareness and understanding of veterans. Not all veterans go through this process, but there are larger percentages of veterans who are going through post-traumatic stress, or other sorts of brain injuries of just being in combat, being that war hero,” Bleier stated. “An understanding by the public that sometimes it’s, ‘well, it’s not my responsibility, why doesn’t the federal government take care of them?’ doesn’t really happen.

For Bleier, that’s where organizations like the NVF, with no red tape from governmental procedures or anything government-related, come into play for veterans, providing help to those in need post-service time.

Still, with all the resources available for veterans from non-governmental agencies, there’s still a stigma surrounding asking for help or admitting one needs help when it comes to veterans. That’s something Bleier hopes veterans in need can learn to move past those reservations and get the help they need and deserve.

“Sometimes it just takes time. Sometimes it takes time for that soldier to be able to come to terms with his own emotions and feelings and take that step towards getting help,” Bleier said. “A lot of times, and this is where the Lifeline comes in, it can just be a simple phone call with another human being on the other end, and oftentimes that other voice becomes very important.”

Like many things in life, that costs money. That’s where Steelers fans near and far can step up and lend a helping hand to Bleier on Veterans Day with a simple donation to the NVF.

A donation to the NVF makes a tangible difference in the lives of veterans across the country and supports veterans on the edge of PTSD-related suicides who call our toll-free/live voice Hotline as a final cry for help.

Additionally, support helps disabled veterans unable to work and on the verge of losing their homes; female veterans who reach out to the NVF regarding their own unique post-combat issues; combat veterans needing navigational advice on how to approach the U.S. Department of Veterans Affairs in order to file a claim; veterans and their families who are trying to push through tough times, and homeless veterans who need food, supplies and housing, as well as encouraging counseling from our Homeless Aid Street Team, all of whom are not only Veterans themselves, but are all extensively trained by the NVF in reaching out to these Veterans on the street who have been struggling to survive, according to the NVF.

As the needs for veterans and their support become greater and greater, it’s crucial to have the right people in place to provide that support, Bleier says.

“It’s crucial to have the right people that are picking up the lifeline,” Bleier said. “That’s part of the problem with the National Veterans Foundation to get the money to be able to support on the other end of the line. To get the right voice, the right psychologist who can deal and handle a veteran needing help.

“If I’m picking up the phone to call, I know it might be my last-ditch effort for help, so I need somebody empathetic on the other end for me to help get through it. That’s why it becomes very important that organizations like the NVF exist and have the funding to help.”

To donate to the NVF, visit https://nvf.org/veterans-donations/.

The biggest thing for Bleier though, outside of monetary donations this Veterans Day, is to get involved in your local community when it comes to supporting veterans.

“There are organizations within your community, there are national organizations that reach veterans,” Bleier said. “Most of the time, it’s grassroots funding from individuals, and not necessarily government agencies, that support and maintain these kinds of services for veterans in their communities.”