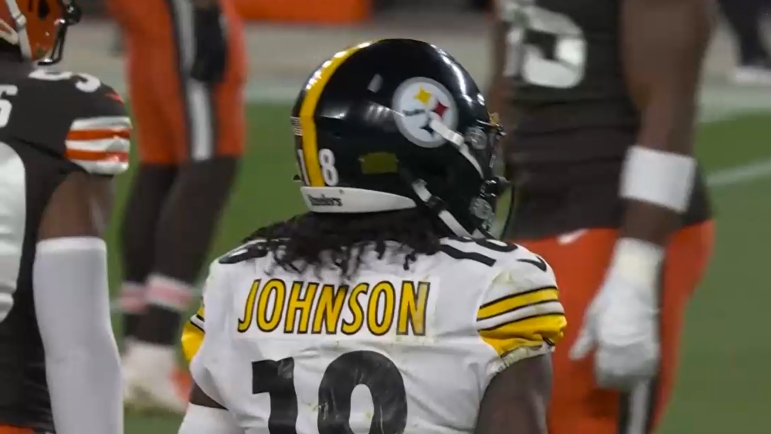 In recent years, the wide receiver room for the Pittsburgh Steelers has undergone significant change on and off the field.

Those changes have led to a bit of a shortage of leadership within the receiver room, especially with a new voice at the top in Jackson.

Fourth-year receiver Diontae Johnson is emerging as that steady veteran leader though, at least this season, stepping into the void from a vocal perspective, adding to his lead-by-example ways to help bring along and nurture a relatively young wide receiver room overall.

Earlier in the week, Johnson received praise from head coach Mike Tomlin for embracing that leadership role, and on Wednesday inside the locker room at the UPMC Rooney Sports Complex, Johnson spoke with reporters about embracing that leadership component for the black and gold, calling it a challenge that he likes, providing him with something different to chase after.

“I like the challenge. It’s something that I’ve never been in this position before. I always like led by example, let my work do the talking,” Johnson stated to reporters, according to video via Steelers.com. “And like I said, I like the challenge. It’s something different. I gotta be able to adapt to it and just lead and be the example of the group and I’m gonna continue to do that in the best way I can. And certain stuff I can’t control and certain stuff I can control. I’m just gonna control my attitude and my effort and hopefully the group follows along with me.”

Diontae Johnson spoke to the media about the bye week, getting back to work for Week 10 + more. pic.twitter.com/E6VQhwzfmA

In previous years Johnson was the type that would focus on leading by example, being one of the first ones onto the field in training camp to get in extra work, or ahead of games to warm up and go through his routine. That’s continued this season, but with his new two-year extension coupled with the losses of Smith-Schuster, McCloud and now Claypool, Johnson is being turned to as the vocal leader of the group as well.

It’s a new role for a guy who is relatively quiet and would rather let his play do the talking, but it’s part of the evolution as a long-tenured player on an offense that is relatively young overall. There’s certainly a leadership void offensively, but guys are starting to find their voices and their level of comfort as those outspoken leaders, and that’s what’s occurring with Johnson overall, which is a welcome development.

Johnson has always been a hard worker, one who is dedicated to his craft at an extremely high level. He already sets a good example for younger receivers, especially someone like George Pickens and even Calvin Austin III. Now, it’s about finding his voice as that go-to leader within the room. So far, it seems like he’s finding that voice and embracing the challenge that lies ahead.