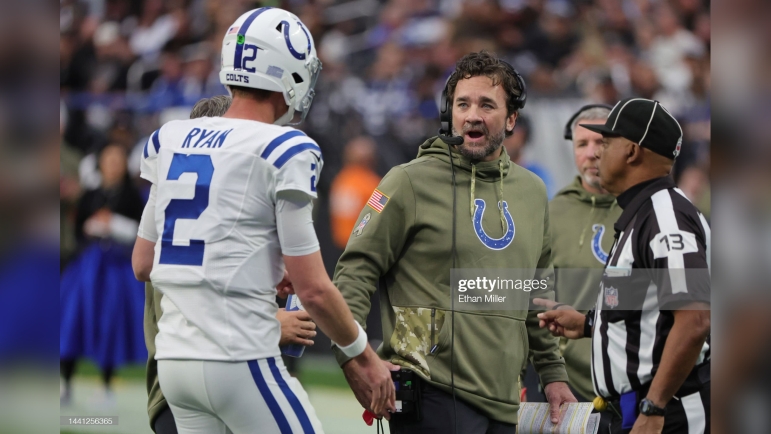 Outside of two games against the Baltimore Ravens, the Pittsburgh Steelers have perhaps the ‘easiest’ remaining schedule in the league. But given that they are one of the teams this year who are considered to make other teams’ schedules easier, that doesn’t necessarily mean all too much.

Up next is a 4-6-1 team, but one that is a bit of a wildcard. After all, they just fired their head coach and hired a guy who’s never coached before to take over—even if it is a former Pro Bowl player for the franchise. They are 1-1 since he took over, and their loss was by just one point to a one-loss team.

Maybe there’s something there after all, though losing to the Steelers wouldn’t help his case. Either way, for Indianapolis Colts wide receiver coach Reggie Wayne, former teammate, and now boss, Jeff Saturday is the game guy now in the head coach’s chair as he was at center.

“Same old Jeff that I’ve always known. Him being a leader, talking in front of a team, that’d be elementary to Jeff. He’s been down that road before,”, Wayne said recently, via the Colts’ website. “His leadership, that’s huge. Holding guys accountable.”

We don’t exactly know what that all entails behind the scenes, but the product on the field has arguably been better on the whole over the past two weeks than it had been before that. Saturday still has six more games to build his resume. And if his approach works, then he could have a future.

“Jeff’s not afraid to go in your face and tell you, that play, you sucked,” Wayne said. “I think not every player can handle that. But as a former player myself, if I suck, I want somebody to be able to tell me. I don’t want to put bad film on tape. I think in that regard most players respect that, and Jeff’s not afraid to challenge guys that way.”

So apparently he’s a ‘player’s coach’, I guess. After all, he was a player and really hasn’t been a coach in between, so it wouldn’t be surprising if he more significantly brings a player’s perspective to this on-the-fly employment opportunity.

Maybe it’s in his own best interest that it came this way. He doesn’t even have much time to think. He just has the next game in front of him. He doesn’t have the burden of contemplating big-picture things. All he’s trying to do is win games by whatever means. It’s not like anything is guaranteed past January.