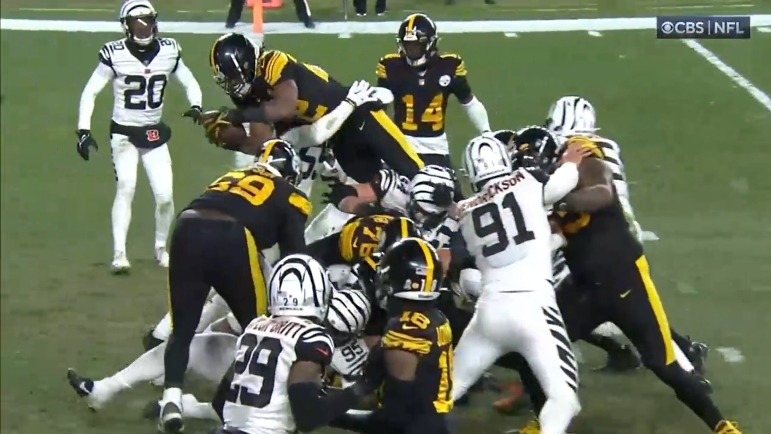 The Pittsburgh Steelers ranked near the bottom in virtually every significant rushing metric last season, even while sending a running back to the Pro Bowl in the process. They’re not likely to do the same in 2022, even if the running game has improved incrementally.

Things have gotten better in particular in the past two weeks, with said former Pro Bowler, Najee Harris, putting together his two best games of the season. He rushed for 99 yards on 20 carries the game before last, and is coming off of a 90-yard, two-touchdown game on Sunday.

Harris suffered a Lisfranc foot injury early in training camp, and that was an issue that he had to deal with throughout the first half of the season. He spent the first six or seven weeks sporting a plate in his cleat to help stabilize his foot. It isn’t all just about him getting healthier, though, although it is a part of the equation.

“It’s a combination of everything”, offensive coordinator Matt Canada said via the team’s website about why they have seen better results from the run game in recent weeks. “The line is gelling and getting work together. They’re doing a very good job. The tight ends are doing a good job. I think Najee is back to full strength. He’d probably tell you that. I think you see a difference in his approach, he attacks the line and those things”.

Harris has largely downplayed the significance of his injury at least in terms of how it has affected his performance, and particularly when it comes to discussing how it limited him physically. The tape, however, speaks to another truth. It’s not the only explanation, but he certainly ran more tentatively and less elusively in the earlier portions of the season.

So with him healthy now for the home stretch, what can we expect from the run game? Center Mason Cole dealing with an injury and threatening his availability for the team’s next game isn’t going to do him or the running game any favors, but they can still function with J.C. Hassenauer in the middle.

The Steelers drafted Harris to be an all-purpose back who can be a difference maker, somebody around whom they could forge an identity. It’s time for him to show that that is the case now that he is as close to full health that he is probably going to get in 2022.

The offensive line has made some strides since the start of the year, even if they leave much to be desired as a whole. The run game can function, however, whenever they don’t get in their own way, which needs to come more frequently.