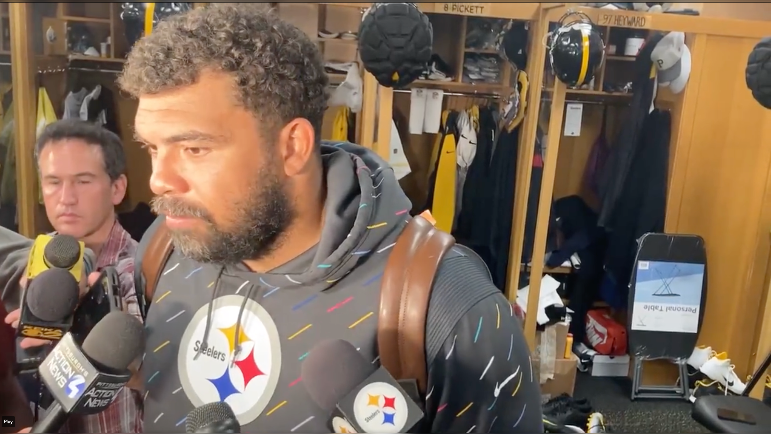 With the Pittsburgh Steelers mired in a 2-6 spiral downwards after the first half of the season, which saw the defense struggle to get stops in key situations and the offense fail to put points on the board on a consistent basis, the team has surprisingly stayed positive and together despite the challenges.

Each week as the losses have piled up, voices such as Cameron Heyward, Alex Highsmith, Mason Cole, Kenny Pickett and more have preached the need to stick together and continue putting in the work in hopes of rebounding from the poor start overall.

That’s not the case elsewhere around the league for high-profile teams that are struggling, especially on offense.

Los Angeles Rams star defensive back Jalen Ramsey raised some eyebrows earlier in the week for critiquing the Rams’ offense after a loss to the Tampa Bay Buccaneers in Week 9, stating that the Rams’ defense shouldn’t have to go back on the field after making a big stop, and that the offense should be able to close out the game.

Of course, the Rams had to go back out onto the field late in that game and watched Tom Brady carve them up, leading to a game-winning touchdown pass to rookie tight end Cade Otton with nine seconds left.

Heyward, speaking on his weekly podcast “Not Just Football w/ Cam Heyward” Tuesday night with co-host Hayden Walsh and Highsmith as a special guest, said he won’t be pointing fingers like that anytime soon, if ever, at least publicly.

“You know, I can only speak for our team. When our offense comes up short you just think as a defense we gotta do more,” Heyward stated, according to video via the NFL on ESPN YouTube page. “Whatever it takes. We know it’s not gonna be perfect on the other side of the ball, but we’re provided an opportunity to win the game when we step on that field.

Spoken like a true team leader, which isn’t something Ramsey can really say in Los Angeles, at least right now.

Being frustrated with the other side of the football is normal in the NFL, especially when there’s a lot at stake. There’s disagreements that happen in the locker rooms and heated conversations with one side of the football to the other. Most of the time, that frustration doesn’t come out publicly because the teams are good at policing each other and keeping that type of stuff in-house.

Is that occurring with the Steelers currently? Maybe. Maybe not.

But with a leader in place like Heyward, that’s not going to come out publicly. It can be frustrating in-game when the offense goes three-and-out or turns the football over and puts the defense in a vulnerable position, but that switch is flipped as soon as the defense steps on the field knowing they have an opportunity to win the game for the Steelers.

That’s the way it should be.