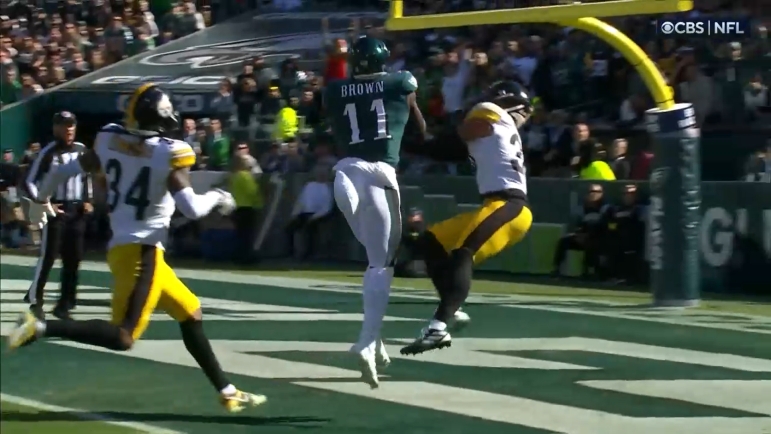 It tends to happen that you find out early on in a blowout that thinks aren’t going to turn out so well. It happened in Buffalo earlier this year when the Bills hit the Pittsburgh Steelers for a 98-yard touchdown. Sunday’s game against the Philadelphia Eagles turned into a blowout loss as well, and the early omen was All-Pro safety Minkah Fitzpatrick failing to make the All-Pro play on a first-quarter deep touchdown.

That’s the same way that former Steelers quarterback Ben Roethlisberger saw it. He spent a lot of his career watching Troy Polamalu make amazing plays. He got the chance to see Fitzpatrick follow in his footsteps for the past three years. So he knew when watching that play what was supposed to happen—but didn’t.

“Their first was a deep pass and Minkah’s there and I’m seeing the whole thing unfolding, and I’m like, ‘Pick! Pick!’”, he said on his new episode of his Footbahlin podcast, posted yesterday. “And then he goes up and makes the catch and I’m thinking to myself, ‘Minkah makes that play nine out of 10 times’”.

“Literally, I was watching it like, ‘This is gonna be picked off’. Like, a no-brainer. And somehow the guy made a play on it. It felt like, ‘Wow, it’s gonna be one of those kind of days’”.

Boy, was it. Although the Steelers matched that with a 75-yard touchdown drive, the fact that it had to be capped off with a fourth-down pass from wide receiver Chase Claypool to fullback Derek Watt at the goal line probably should have been another omen of how the day would go.

That first touchdown was a 39-yard strike from quarterback Jalen Hurts to wide receiver A.J. Brown, and the pair would follow up with two more deep touchdowns of 27 and 29 yards in the second quarter. The Eagles as a team added two more touchdowns before the day was through; the Steelers would add two field goals.

Now, he has already made several plays this season ranging from excellent to astounding, in his defense, and already has three interceptions in the first half of the year. But his work keeping a lid on the back end is what transformed this defense back in 2019 when they first acquired him.

They couldn’t do that in Philadelphia. They couldn’t do it in Buffalo. Those were Fitzpatrick’s two worst games, and you saw how they turned out. Admittedly, they were also against arguably the two best teams in the NFL, and on the road. But the fact remains that there were plays in those games that you, and Minkah, expect him to make that he did not. And when that happens, you tend to know, like Roethlisberger did, that it’s gonna be one of those kind of days.