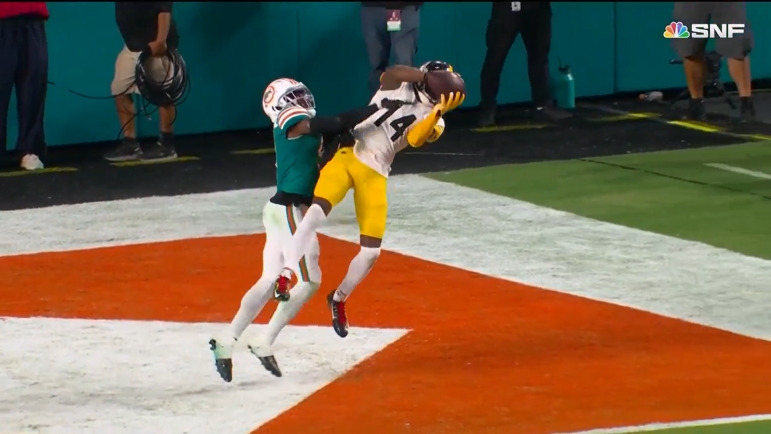 Kenny Pickett played four years in high school, five years in college, and has been around some quality receivers during his short time in the NFL. But none of them match the raw talent and ability of George Pickens. Speaking with reporters Wednesday, Pickett said Pickens is the best athlete he’s ever called a teammate.

“He’s the best athlete I’ve played with,” Pickens said via Steelers.com. “Just the freak things that he does, the catches he makes that are so nonchalant to him. But I kind of look around like, I’ve never seen that before in my life. He’s a unique guy that can do a lot of great things, so we just gotta continue to get him to football.”

Pickens displayed that ability in Georgia, making him the Steelers’ second round pick in this year’s draft. He immediately carried that over into the summer with highlight catch after highlight catch. He flashed it during one two-minute drill, making a diving deep ball grab down the left sideline followed by an outstanding one-handed grab on a fade for a touchdown the very next play.

Call it the George Pickens show. 37 yard deep ball left sideline from Rudolph. Then makes one handed, juggling catch on fade for TD. Wow. What a sequence. #Steelers https://t.co/7FofI8h6GS

He quickly carried that over into stadiums with this toe-tapping grab for a long touchdown from Mason Rudolph in the preseason.

And he’s done in the same in the regular season with this highlight reel grab in Week 3 against the Cleveland Browns, right up there with Justin Jefferson’s recent grab as the best catches on the season.

To put it simply, Pickens makes the amazing look routine and it’s why his role in the Steelers’ offense has increased. His target share has gone up in recent weeks. Some of that is thanks to Chase Claypool’s trade but Pickens is third on in the team with 53 targets and narrowly behind TE Pat Freiermuth and WR Diontae Johnson in yards.

“He’s evolving to a complete receiver and doing more things, running different routes and having a full route tree that corners have to deal with.”

That’s something we’ve noted in recent weeks, Pickens expanding his versatility route tree and involvement in the offense. In Week 10 against the New Orleans Saints, he was an active participant in the run game with a rushing score and 22-yard run. Against the Cincinnati Bengals, he ran solid routes for his 24-yard touchdown and a great sluggo that got himself wide open though he and Pickett couldn’t ultimately connect.

As has been clear since the moment he became a Steeler, Pickens’ ceiling is sky-high. As he adds to his game, he’ll be an even better receiver, still a young guy who missed most of his final college season due to a torn ACL suffered in March of 2021. Pickens could be the team’s true #1 receiver by 2023. Heck, he might be there now.