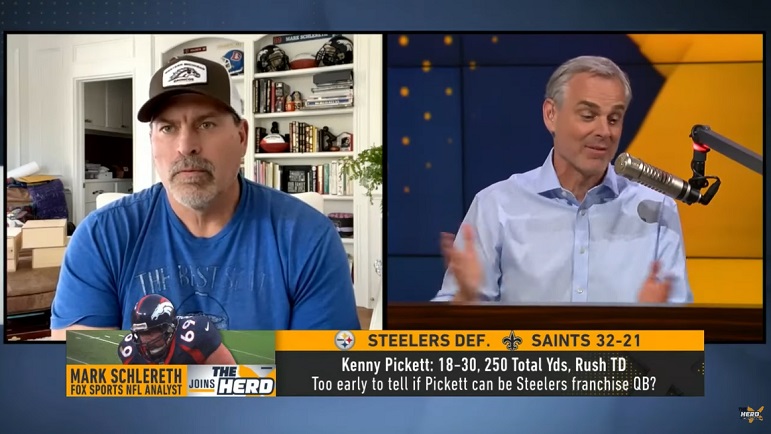 Former offensive lineman and now color commentator for FOX Mark Schlereth joined Colin Cowherd on The Herd today and discussed Pittsburgh Steelers rookie quarterback Kenny Pickett. Schlereth was on the broadcast as the color commentator this past Sunday for the Steelers vs New Orleans Saints game, so he got an up close and personal look at Pickett.

When talking about Pickett, Cowherd said that his struggles this year does not bother him too much and that in rookie seasons, traits are more important. Cowherd asked Schlereth if he has seen any traits in Pickett that tells him that he is cut out to be a quality NFL quarterback in the future.

Schlereth did mention that there needs to be improvement with Pickett before he gets to a quality quarterback level, and that the difference from college to the NFL is massive. He specifically mentioned throwing windows and that throws that are open in college would be considered covered in the NFL.

“Like when you’re in college, the windows are gigantic, right? Yeah. And you see a guy that’s got somebody on his shoulder and you’re like, wow, that guy’s covered. No, he is not, not in the NFL. You throw that a hundred percent of the time.”

A situation like that unfolded in the red-zone Sunday, when Pickett passed up a seam route to George Pickens because he had a cornerback on his shoulder.

This will likely get me more "die of cancer" emails, but thought Kenny should have maybe drilled Pickens at top here for a TD. #Steelers #NFL pic.twitter.com/9NRAr5f34V

Pickett just needs to trust his arm to make that throw and zip it in there. It is a throw that a NFL quarterback must be able to make if he is going to succeed at this level. Pickett has been a bit shy to make throws like that this season as Schlereth has pointed out. There have been many times when turning on film where one can point to a player who is NFL open that Pickett should have hit, but he passed it up because he is nervous. Part of the reason for this nervousness could be because of all the turnovers Pickett has committed so far this season (eight interceptions) and he does not want to commit anymore. However, at this point in the season the playoffs are a long shot and Pickett should just take those chances cause it is critical for evaluation to see if he can complete those passes at a high clip.

Schlereth also pointed out that the offensive line has not been a big help for Pickett this year calling them “average.” This is a good point by Schlereth, as while the offensive line has clearly improved a lot by the standards of the last two seasons, they still aren’t very good. Watching the Steelers try and run the ball this year is like getting teeth pulled. And while the pass blocking hasn’t been terrible, it also is not very good. There are still far too many times when the pocket collapses on Pickett quickly.

This offseason will be huge for the future of the Steelers. Pickett must make a second year jump like Justin Fields has for the Chicago Bears, and Omar Khan and Andy Weidl have to address the holes in the Steelers offensive line and defensive backs room. If they can successfully fill those holes, and Pickett improves, the Steelers can get back to being Super Bowl contenders in only a few seasons.