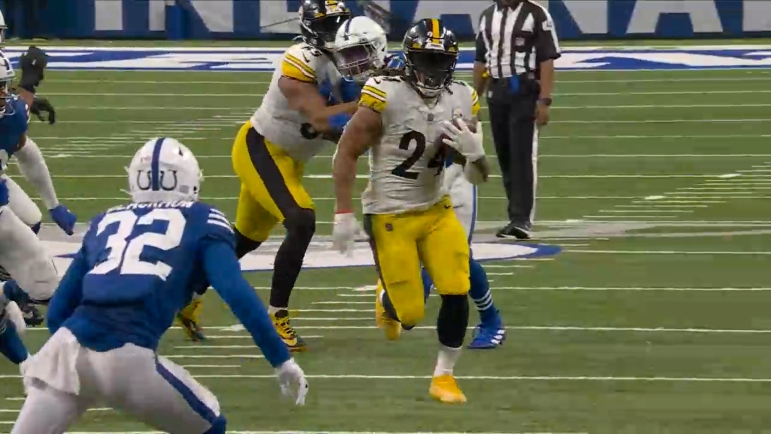 The Pittsburgh Steelers’ rushing offense has been receiving a lot of attention lately, and rightly so. Since the bye week four weeks ago, they have been one of the better teams in the league in moving the ball on the ground, most especially in the metric of run success rate.

Monday’s win over the Indianapolis Colts may well have been their most complete rushing effort of the season thus far, with four different players contributing 30-plus yards, totaling 172 overall as a team.

The running back by committee took a bit of a detour in that game with Benny Snell Jr. and Anthony McFarland Jr. playing sizeable roles, but Najee Harris also scored a touchdown and had some success before exiting with an injury. It all even got the defense’s attention.

“A big round of applause not only for the o-line but the running game,” defensive lineman Cameron Heyward said in the latest episode of his Not Just Football podcast in recapping Monday night’s win. “You got Najee really toting the ball, got hurt in the middle of the game, and then guys like Benny Snell, Anthony McFarland had to step up, which they did. But it was a group effort on offense. I thought everybody really played in cohesion.”

Neither Snell nor McFarland had even touched the football this season prior to the last game. Snell had been on the 53-man roster the entire year even dressed for every game, but his first three offensive snaps of the season only came last week after Jaylen Warren was injured early on.

Once Harris had to bail out of Monday’s game with an abdominal injury, it was left to Snell and McFarland, who was called up from the practice squad for the game for the first time this season to take Warren’s spot.

And they did the job. Snell rushed for 62 yards on 12 carries and scored the game-winning touchdown. McFarland had a lighter workload, seeing just six carries, but he got 30 yards out of them, including a 14-yard run, adding two catches for 11 yards as well, one of them a 12-yard pickup (the other was a screen blown up by a heads-up defensive play that had no chance of succeeding).

Head coach Mike Tomlin did not know the availability of Harris or Warren heading into the team’s next game against the Atlanta Falcons, so we don’t even know who is going to be in the backfield for the Steelers the next time they take the field, but both Snell and McFarland showed out, at least this week.

The Falcons have not been a very good rushing defense at all this year, though on the flip side they have been one of the best rushing offenses. This could prove to be a run-heavy game for both teams, and perhaps Pittsburgh finally has the unit to measure up to the challenge.