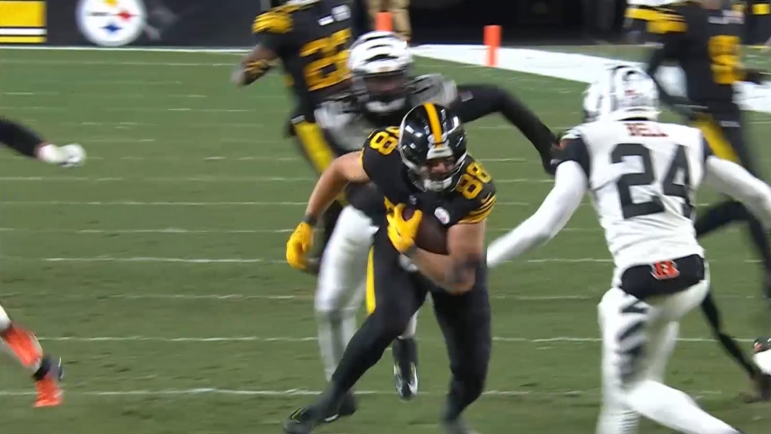 Reasoning: The second-year tight end continues to push toward a strong season, now leading the Steelers in receiving yards through 10 games and continuing to prove to be reliable when the ball is within reach of him as well as in critical moments.

A 2021 second-round pick, Pat Freiermuth already entered his rookie season with the reputation of being somebody who will catch anything that hits his hands. Largely, that was true throughout his rookie season, with only two drops on the year. He’s had a few this season, but he’s largely been on an upward trajectory throughout the year.

And some inconsistency in the passing game should be no surprise considering they’ve had two new quarterbacks this year, but he’s been friendly to all who pass the ball this season. He saw a career-high 12 targets in Sunday’s game, coming down with eight receptions for 79 yards. It was his fourth game of 75 yards or more this season and the second-highest single-game total of his career.

Of course, it’s not just about the numbers but the plays themselves. He’s come through in big moments or made big plays. His 27-yard reception on a mean and physical catch-and-run on the final drive before halftime was crucial in setting up what was at the time a go-ahead field goal.

Rookie quarterback Kenny Pickett repeatedly went to his tight end on their final drive, connecting with him three times each on pickups of nine yards. The last moved the chains on third down. Of course not every connection was successful, and he did get called for a hold, which I believe was at least somewhat questionable.

By and large, however, he shows himself to be the player the Steelers drafted him to be, and I believe there is still more meat on the bone. He hasn’t quite developed into the blocker I thought he would be up to this point—perhaps partly because the Steelers are comfortable with the job Zach Gentry has done in that role—but it’s not uncommon for tight ends to hit their stride in that department in their third or fourth seasons.