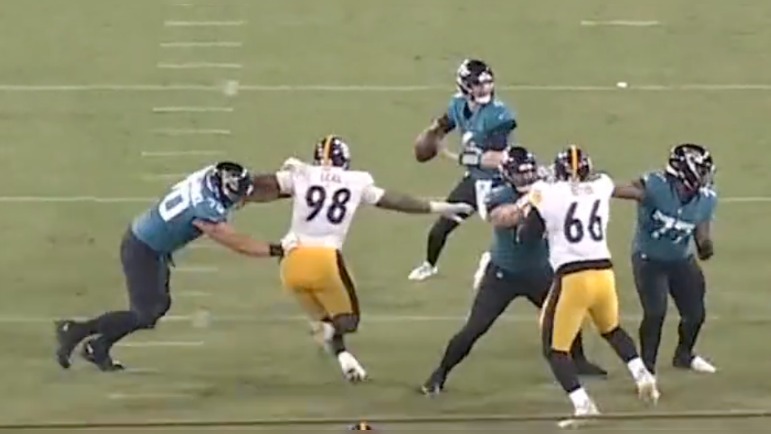 Reasoning: The rookie defensive lineman has declared himself 100 percent ready to go and playing without restrictions, having been back practicing for weeks now after spending the past month and a half on the Reserve/Injured List and ready to get back to contributing.

Defensive coordinator Teryl Austin admitted while DeMarvin Leal was on the Reserve/Injured List that they probably saw him on the field more during his first several games of the season more than they would have liked.

The Steelers felt forced to play him, to a certain extent, as part of a strategy to fill in for outside linebacker T.J. Watt after he suffered a pectoral injury in the season opener that resulted in him missing the next seven games.

Even though he’s a defensive lineman, Leal was a meaningful part of the plan to replace him, even spending time standing up off the edge. With Watt back, he likely won’t be asked to do that, instead with the coaching staff wanting him to focus in on his craft as a 3-4 end.

And he is ready to get back to it, telling reporters that he is completely without restriction at this point and 100 percent following a procedure to clean up a knee injury he suffered in Buffalo. He is on the eve of his return.

Up until that point, he was averaging over 19 snaps per game. He played 50 snaps in his final two games, his playing time percentage jumping up from around 20 percent to about 40 percent. And importantly, he was showing flashes, which is why they want to get him back and going.

I imagine in his return, they’re going to focus on giving him a limited role and working on him excelling at that one thing. After all, they do have plenty of depth up front, so it shouldn’t be very burdensome to have him specializing. A situational pass rusher seems the most logical call to me.