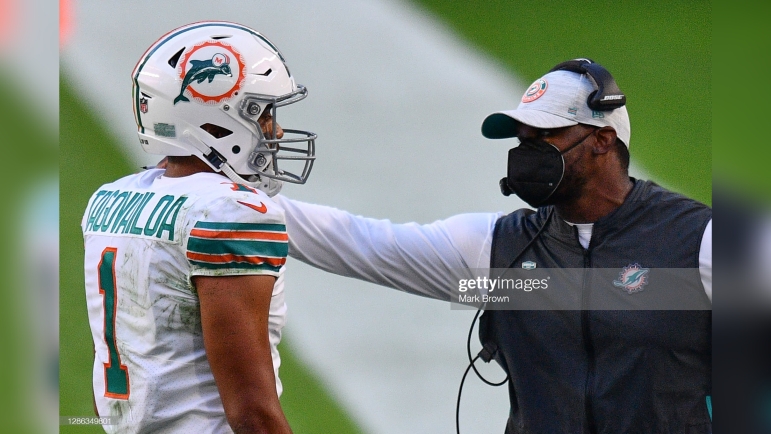 Storylines usually don’t mean a whole lot when it comes to actually playing the game of football. I think we all know that. Most of it takes outside the confines of the actual game itself and instead deals with the human drama that promotes interest from viewership, and doesn’t tangibly impact the result.

Still, there can be a grain of truth in a story, such as the potential for Pittsburgh Steelers senior defensive assistant Brian Flores knowing a thing or two about their next opponent, the Miami Dolphins. After all, he was their head coach for the past three seasons, and even if much has changed since then, there is some overlap—such as the quarterback.

That would be Tua Tagovailoa, who is making his first trip back on the field after missing some games due to a concussion. He spoke to reporters yesterday for the first time since his concussion and was asked about the impact of Flores being on the other sideline this week.

He went on toe praise the Steelers’ defense, which is admittedly coming off of one of its better games of the season, and which should get some reinforcements in the secondary after missing four starters from the previous game. Still, the quarterback wasn’t so sure how much value there is in Flores having worked with him before.

“I’ve been with him for the past two years, so he definitely knows what I like and what I don’t like”, he said. “But then again, schematically, this is Mike’s (McDaniel) offense and this isn’t the same offense that I’ve been running while he’s been here the past two years”.

And the offense isn’t the same. Tyreek Hill certainly wasn’t there when Flores was, and that’s a major component. The All-Pro already has over 700 receiving yards on the season. Jaylen Waddle is also in his second season and is continuing to grow and develop, now over 500 yards himself.

McDaniel was hired for his offensive prowess, so this is really a different offense shaped in his image. The quarterback might be the same, but he is not playing the same way that he had previously. And he could change things up a bit following his concussion as well. He hinted at learning when to let plays go, for example, not only to protect himself but to avoid unforced errors.

To be quite honest, I had completely forgotten about the idea that Flores was coaching against the Dolphins this week until it got brought up. I really doubt that it makes much difference either way, at least in terms of football. For one thing, he’s not the defensive coordinator, so he only has so much control over what actually happens. And his coaching methodology is naturally aggressive, so it’s not like he can up the ante in that regard. It’s just football.