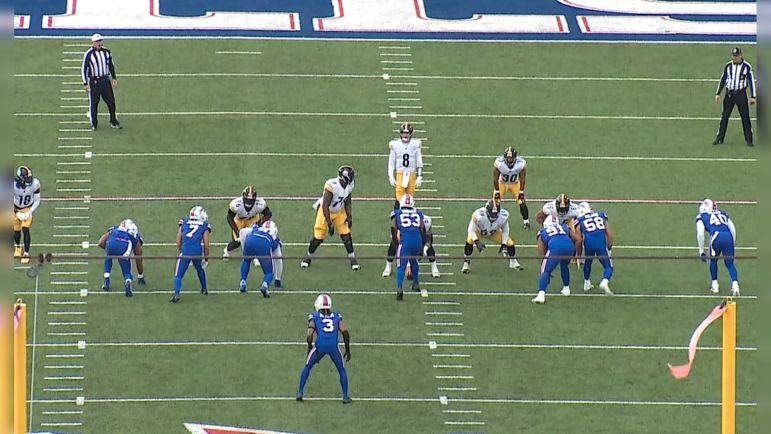 Though more changes are likely to come on the heels of a 38-3 loss Sunday afternoon, the Pittsburgh Steelers made one of them prior to their blowout loss. Jaylen Warren is the team’s new third down back, passing up Najee Harris yesterday. A quick look at the film shows Warren played on most third downs, especially early in the game, subbing in for Harris in passing situations.

As our tweet noted, Warren has been better in pass protection this year than Harris. Coaches have praised the job Warren’s done, and it was the first thing that caught our attention this summer, the rookie shining in the team’s first backs-on-‘backers drill of camp. Here’s what we wrote at the time:

“RB Jaylen Warren might be the name to watch. Squatty body with good leg drive and I loved his output and competitive nature, his fearlessness, in backs on ‘backers. Dude put his face in the fan with good bend and feet. Working as an upback, involved in special teams…I’m keeping an eye on him.”

UDFA RB Jaylen Warren really impressed me yesterday. His work in backs on 'backers reminded me of Najee Harris last year. No fear. Anchored, ran his feet, and won. In team session, he ran angry and fell forward. Working as upback on STs. Name to watch. #Steelers

Harris looked strong in the pass game as a rookie but has struggled mightily this season. He’s been far more inconsistent and not nearly as technical, looking flat out terrible on this rep last week against the Jets. It may have gotten the job done, but it’s horrid technique that will get your quarterback killed in the long run.

If there's an area of Najee Harris' game I'm disappointed in, it's pass pro. Allowed one sack this year and badly drops his eyes/head on this rep last week. Protection was very good last year. Far less consistent in 2022. #Steelers pic.twitter.com/QZoMaEzvCK

We charted Harris for one sack allowed this season, equaling the total he allowed as a rookie. Harris has had a tough start to the season, battling foot injuries since the first day in pads. He finished yesterday with just 11 carries for 20 yards and now has been removed from passing situations.

Though numbers are skewed due to the blowout, Warren played one more snap than Harris yesterday. Warren’s role could continue to increase as he keeps impressing the coaching staff.