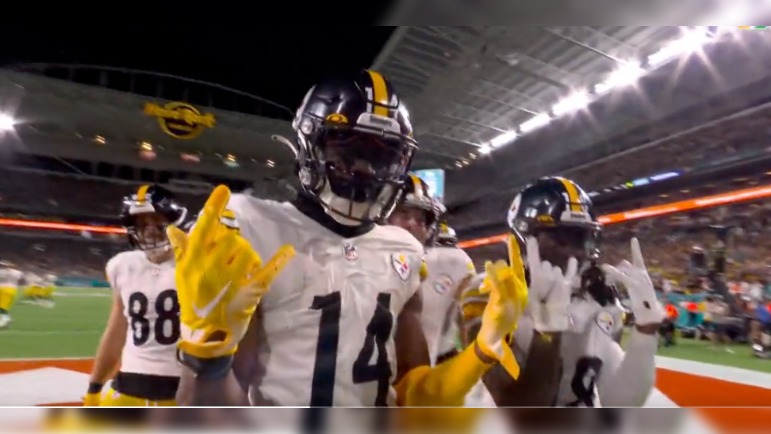 Even with some of the pre-draft negativity surrounding wide receiver George Pickens coming out of the University of Georgia, the Pittsburgh Steelers seemingly never blinked an eye at some of the perceived maturity issues and red flags that were talked about regarding Pickens.

Now, after selecting him 52nd overall in April, the Steelers have a certified star in the making at receiver, one that — at least based on head coach Mike Tomlin’s observations — loves football and loves everything about the job of being a pro football player.

George Pickens is a PROBLEM pic.twitter.com/IM4VCkJnGr

Speaking with reporters Tuesday following a 16-10 loss to the Miami Dolphins in which Pickens hauled in his first career touchdown and made a number of big plays for the Steelers, Tomlin praised the rookie receiver overall work ethic and habits, carrying himself in a certain way on and off the field that has been enjoyable for the Steelers, while also comparing him to star safety Minkah Fitzpatrick in that aspect.

“He loves to play football. He’s a competitor. The guys that love to play football, it shows up in everything that they do. It doesn’t matter whether it’s something specific to their job,” Tomlin stated to reporters, according to video via the Steelers official YouTube page. “On Fridays, we field onside kicks at the end of practice and Minkah is always the last guy on the field fielding onside kicks. He loves football. He likes to work at it. He loves what’s seemingly the drudgery. And I think you could say the same thing about George.

I asked George Pickens which of his highlight-reel catches is his all-time favorite.

his answer was *so* perfectly George Pickens pic.twitter.com/RdAVdj7TwR

So far, that’s been exactly who Pickens is. He genuinely loves the game, has fun working on his craft, and loves to be around teammates and coaches, improving each and every day.

While he does get frustrated at times on the field with the lack of targets, Pickens wears his heart on his sleeve, and that is endearing to teammates, who see his passion for the game and desire to be great. He’s already a very good player in his own right, but with the work ethic, determination and commitment to the proper habits overall, the sky is the limit for Pickens.

The George Pickens method for getting open 😂 pic.twitter.com/WOs4XOU0ab

The Steelers are quite fortunate 10 other receivers went ahead of him, giving them an opportunity to land the former college star. They’ve got a true football player at the position again, very similarity to one former Georgia Bulldog that endeared himself to fans for his passion and overall commitment as well.