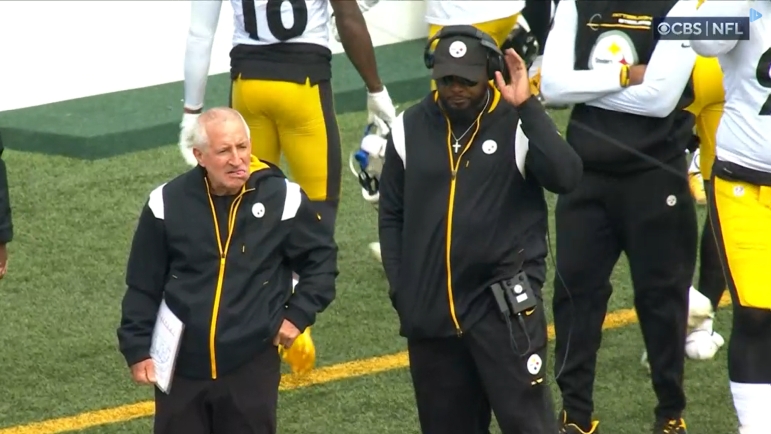 Winners and losers from the Pittsburgh Steelers 38-3 loss to the Buffalo Bills Sunday.

George Pickens – It’s a…light list of winners today. But watching George Pickens will soak up some tears. Kenny Pickett shows plenty of trust in Pickens and with good reason, capable of winning contested and skying over defensive backs. He was easily the team’s top first half weapon, catching four passes for 63 yards in the first half. His second half was quieter but showed the ability to make gold medal catches even if they weren’t completions.

DeMarvin Leal – Rookies were the bright spot, a little bit of hope for the future when there isn’t much of a present. Leal was an active member of the team’s 3-3-5 defense. He batted down two of Josh Allen’s passes and got on a TE to blow up a toss play early in the game. Leal’s been the biggest benefactor of T.J. Watt’s injury and has been able to accelerate his growth and development, even though he’s unlikely to be a full-time rush end. Still, his play here should keep the Steelers using him creatively even when Watt returns.

Levi Wallace – I mean, I guess? Wallace was covering Gabe Davis on his 98-yard score, though Tre Norwood took a bad angle and offered zero help over the top. Wallace did have a breakup on a long throw to Stefon Diggs and turned his head around for a nice end zone INT the first half. A couple of bright spots on an otherwise terrible defensive day.

James Daniels – Forget about his blocking. Sticking up for your rookie QB after he takes a hit (that should’ve been called a penalty and somehow wasn’t). Steelers’ coaches, teammates, and fans gotta love that. I do. You get on the winners list for that. Defend your quarterback. Somebody showed life on this lifeless team. Kudos to Jaylen Warren too.

As for Pickett, he battled, he was gutsy and he didn’t play poorly, but I don’t know if it was enough to be on the winners list, especially with the Bills calling off the dogs basically by halftime. Feel free to disagree. I’m not discouraged by his first start even in terrible defeat.

Mike Tomlin/Matt Canada – There’s a lot of losers today. But it starts with the coaching staff. Beating Buffalo would’ve been a monumental task and if Pittsburgh wanted any chance of that, they had to be aggressive. If you’re going to go down, go down swinging. The Steelers did anything but. They ran the ball on 1st and 2nd down to no avail, despite the Bills being most battered in the secondary. Their pass plays were safe, the same rollout/curl run over and over again and they refused to open up the offense. Playing on the road is a tough environment but you can’t talk about Pickett being a different kind of rookie and then treat him like your typical one.

Though it ultimately wouldn’t have mattered, Tomlin’s decision to kick a field goal down 24-3 in the second quarter on 4th and 5 – on a windy day – was an indefensible call. It’s a lot of fear livin’ for a coach who professes not to. Football karma did its part with Chris Boswell’s field goal pushing wide left. Talk about waving a white flag. It’s hard to rally and inspire with give-up decisions like that.

Tomlin did it again (!!!) at the end of the third quarter down 31-3. Blows my mind and I don’t even want to write anymore about it.

Danny Smith – It’s not easy to be on your third-string returner and make a last-second adjustment from Steven Sims, who missed the start of the game with an eye injury. But I can’t understand why the team turned to CB James Pierre, who fumbled the Steelers first kick return, unable to track and field the ball on a windy day. Pierre didn’t even return kicks in college on a regular basis, just three in his career, and Mike Tomlin hates using defenders back there for a reason.

So how did the team turn to Pierre instead of probably anybody else. A receiver like Diontae Johnson or George Pickens, guys who are regularly in the return line and of course, catch the ball all the time (save your Johnson drop jokes for the moment). I would’ve even taken RB Benny Snell, an upman who has returned the occasional kick before on squib kicks and ones that are skied into the air.

I’m putting that decision on Smith. And it was the wrong one. Overall, a weird day for special teams. A lot of ugly from both sides.

Defense/Defending The Deep Ball – In a way, it’s hard to blame the Steelers. They were simply outclassed and outmatched. Today was watching Usain Bolt race…me. Pittsburgh’s problems only got worse when they dealt with more in-game injuries Cam Sutton going down late in the first half and Levi Wallace in the second half. Josh Allen cooked them, starting out with a 98-yard TD to Gabe Davis, who added a 62-yard score on a great play against Minkah Fitzpatrick later in the half. Pittsburgh played Arthur Maulet, Josh Jackson, Elijah Riley against Allen. Squirt gun to an actual gun fight. Allen put up 348 yards and four touchdowns at the half. He could’ve had more.

This defense can’t rush the quarterback, can’t stop the big play, with a middling run defense. There’s little they can do right and not all of it can be blamed on T.J. Watt.

Devin Bush – While many on this defense struggled, Bush stuck out a bit more than others. Not making plays at the catch point. Getting beat at the break point. Unable to breakdown and even get a hand on Josh Allen on an early LB blitz. Bush has been more physical and gotten off blocks this year but he might even look less athletic this year. His sideline-to-sideline ability he flashed his rookie year is gone and there’s little about his game to get excited about.

Najee Harris – Game script made it hard for Harris to get going today but the first half action was poor, like everything else. Unable to create, a potential missed hole or two (the All-22 is best to confirm), and not making plays post-catch in the passing game. Harris had made some progress the last two weeks but today was a total dud.

Diontae Johnson – Johnson makes the tough catches look easy and the easy ones look tough. He had a third down throw that was high but through his hands and he struggled to keep his feet inbounds on the sideline. Tough plays but one’s he’s capable of making and ones Pittsburgh definitely needed. Johnson is a great route runner and makes some incredible plays but his lack of consistency is just maddening and he goes through too many slumps. Moments get in his head and he has a nasty habit of stacking bad plays/games.