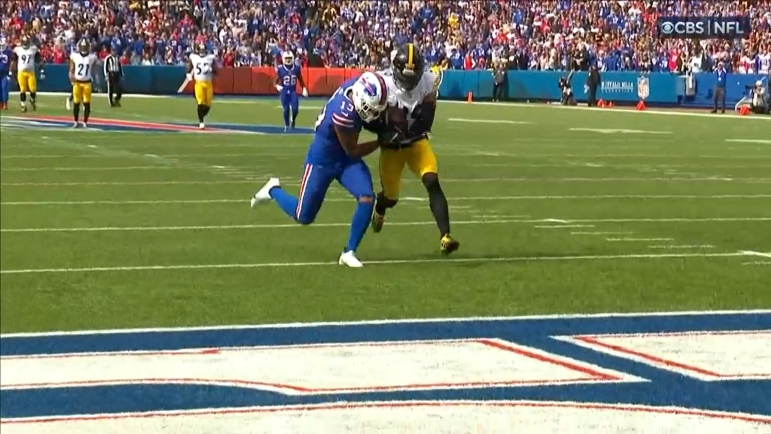 The 1-3 Pittsburgh Steelers traveled to Buffalo on Sunday to face off against the 3-1 Bills but got severely dominated, losing 38-3.

The Steelers won the toss and chose to defer, so Buffalo started the game with possession. On the opening kickoff, the Buffalo Bills return man muffed the kick, so Buffalo’s possession started at their own two-yard line. After an incompletion and a run for no gain, QB Josh Allen threw to WR Gabriel Davis for a 98-yard touchdown. Buffalo took an early 7-0 lead after K Tyler Bass converted the extra point.

After a complete defensive breakdown, the Steelers dug themselves a deeper hole when backup kick returner, James Pierre, muffed the kickoff and Buffalo recovered, so the Bills started their second possession of the game at Pittsburgh’s own 21-yard line. Due to an early holding penalty, Buffalo found themselves behind the sticks and were unable to convert a first down. As if the game couldn’t get any weirder to start, DT Cam Heyward blocked the field goal attempt, leaving the score at a manageable 7-0.

To start off the Steelers first offensive possession, QB Kenny Pickett converted an important third and eleven, to WR George Pickens for the first down. The next play, WR Chase Claypool caught an eleven-yard pass as he fought defenders and kept his feet moving for a first down. After a six-yard run by RB Najee Harris, Pickett converted another third-down on a short pass to TE Zach Gentry over the middle. Shortly after, Pickens showed his impressive body control once again, as he hauled in a twelve-yard pass on the right sideline and brought the ball to Buffalo’s 13-yard line. Unfortunately, the preliminary drive was stalled there, as WR Diontae Johnson was unable to complete another circus-like catch on the sideline. K Chris Boswell kicked a 29-yard field goal to make the score 7-3.

Buffalo’s third possession started off with a 31-yard completion to WR Khalil Shakir, which brought the ball into Steelers territory. The next play, Allen scrambled to his left and picked up 16 yards after CB Cam Sutton made the tackle. Right after, WR Stefon Diggs was open near the end zone on first down, but Allen surprisingly missed the throw. Allen’s third down attempt was incomplete to Diggs again, leaving a 35-yard field goal for Bass, which he converted. Buffalo obtained a 10-3 lead with just over two minutes left in the first quarter.

Harris ran for three yards to lead off Pittsburgh’s next possession. TE Pat Freiermuth caught his first ball of the day for 13 yards on second down, but the play was called back due to a holding penalty on fellow tight end Gentry. For second and long, Johnson made a couple defenders miss and gained eleven yards, but then dropped a third down pass which would have kept the drive alive. P Pressley Harvin booted a 69-yard punt which was tracked down by CB James Pierre, which forced Buffalo to start their drive from their own one-yard line.

To start their next possession, Harris ran for six yards and then no-gain. Pickett threw it short to Harris on third down but was unable to make a man miss. The Steelers were not able to come away with any points after a great defensive hold. Harvin punted it away to Buffalo’s 38-yard line, which ended in a fair catch by Shakir.

Allen uncorked a 62-yard bomb to Davis on the first play of the drive for a touchdown, as Davis muscled the ball away from Fitzpatrick. The extra point was good, which made the score 17-3.

Similar to many previous drives, Harris received two straight runs up the middle but was not able to gain more than a yard. Pickett was unable to find a completion on third down, which forced a third straight three-and-out for the offense. Harvin punted the ball a measly 26 yards, so the Bills started their drive at their own 47-yard line.

Buffalo continued their success on opening plays, as RB Devin Singletary rushed off the left tackle for 23 yards which was extended by an unnecessary roughness call for a late hit by Myles Jack. The very next play, Allen found Diggs in the end zone once he beat Sutton to the middle of the field. The extra point was good, and the Bills led the Steelers 24-3.

The Pickett to Pickens connection arose again on the first play of Pittsburgh’s drive, as they connected for ten yards and a first down. Gentry caught an eleven-yard pass on the next play to convert another first down. After an incompletion and five-yard catch by Johnson, Pickett converted on third and medium on a 31-yard pass to Pickens, which once again showcased his insane catching ability. The drive stalled after Johnson was unable to get his feet inbounds on a would-be touchdown, and then Boswell missed a 33-yard field goal. The score still stood at 24-3.

The Bills took possession at their own 23-yard line, and quickly moved up the field once Shakir caught a 20-yard pass. Shakir then dropped a wide-open pass near the right sideline, but the first down was converted the next play on a fantastic catch by Morris for 13 yards. After a twelve-yard catch by Diggs and short scramble by Allen, Buffalo was at Pittsburgh’s 29-yard line with 1:51 left and the Steelers called their first timeout. Two plays later, Allen found Shakir once again for a 24-yard touchdown. The Bills took a 31-3 lead after a successful extra point by Bass.

With 56 seconds left in the half, the Steelers started their possession at their own 27-yard line. Harris caught a five-yard pass on first down, and then an offsides penalty against Buffalo gave Pittsburgh a free first down. Kenny Pickett was then intercepted by rookie CB Kaiir Elam on a pass to the left sideline intended for Johnson.

The Bills coasted into halftime with a 31-3 lead, a score that almost didn’t represent how bad the domination had been.

The Steelers received the ball to start off the second half, and Pickett completed a 23-yard pass to Johnson on the first play of the possession. After a three-yard run by Harris up the middle, Elam was flagged for defensive pass interference for a ten-yard gain. Two straight nine-yard completions to Harris and Claypool brought the ball to Buffalo’s 33-yard line. Pickett then completed a seven-yard pass to Johnson on the left sideline but was then sacked for a three-yard loss on second down. A miscommunication on third down between Pickett and Pickens left the Steelers with a fourth and six, but Johnson dropped the ball past the sticks, which resulted in a turnover on downs.

Singletary started off Buffalo’s second half with an eight-yard run off the right tackle. Davis continued his impressive day as he hauled in an eleven-yard bullet over the middle which moved the chains. Allen faced a third and four but scrambled outside for a 21-yard gain to get into Pittsburgh’s territory. Steelers CB Josh Jackson was flagged in the end zone for pass interference, but then recovered a fumble by Buffalo’s Morris on the next play which resulted in a touchback.

After the turnover, Pittsburgh started off their drive with two straight ten-yard completions to Pickens. Pickett was then sacked by LB Von Miller for a six-yard loss, as he was not able to escape the pocket in time. On second and long, Freiermuth caught a seven-yard ball but was hurt on the play after a hard hit from his backside. While under pressure, Pickett hung in the pocket and threw a dart to Claypool for 20 yards which converted on third and eight. Next play, Johnson caught a ball near the right sideline and made a man miss for a gain of 14. Pickett ran for a first down on second and long, but OL James Daniels took exception to a potential late hit on his quarterback, which resulted in Daniels hitting the defender after the play and causing an unnecessary roughness penalty. A short completion to Gentry on third down was not enough for the conversion and after a false start on fourth and eight, Pittsburgh elected to kick a 45-yard field goal. Boswell missed the attempt, and the third quarter ended immediately after the unsuccessful kick.

Surprisingly, with a 31-3 lead going into the fourth quarter, Allen still took the field leading Buffalo. He started off by throwing a 41-yard pass to Diggs, which was then immediately followed by a 24-yard touchdown run by rookie RB James Cook up the middle. Bass nailed the extra point, and Bills took a 38-3 lead.

Pickett started off Pittsburgh’s drive with a ten-yard completion to rookie RB Jaylen Warren. Warren then ran twice in a row for one and ten yards, then caught an additional pass for twelve yards as he showed his elusiveness in the open field. Claypool and Gentry both caught six-yard balls converting a first down, but then four straight incompletions followed, including a fourth down attempt to Claypool that was dropped.

Finally, Allen took to the bench and QB Case Keenum entered into the game. Cook ran to the left for six yards on first down, but then an incompletion and short pass made Buffalo punt for the first time all game.

The Steelers started their drive at their own 20-yard line, and quickly faced fourth and ten after two incompletions and a no-gain run from Warren. Harvin kicked another poor punt, which left Buffalo to start at their own 46-yard line.

The Bills failed to reach a first down once again, as Keenum was not able to convert a third and five. The absence of Allen was very apparent as Buffalo struggled to move the ball for the first time all game. P Sam Martin kicked the ball into the end zone, and the Steelers started off at their own 20-yard line.

Pickett threw two straight completions to TE Connor Heyward to convert a first down to start off the possession. Warren then caught a short pass and made the first defender miss and carried a couple more for a gain of 13. Warren saw more action the next play when he ran for twelve yards off the right guard. Back-to-back completions by Pickett to Gentry and Boykin for eleven yards each took Pittsburgh up to Buffalo’s 22-yard line. A short catch by Claypool brought the game to the two-minute warning. A sack on third down knocked the Steelers back to Buffalo’s 26-yard line. A scrum developed after a potentially dirty hit on fourth down by DE Shaq Lawson, with Pickett in the middle of it all. The Steelers did not convert the fourth and long, leaving Buffalo time to kneel on the ball to win the game.

Pittsburgh will face another challenging opponent next week when they play the Tampa Bay Buccaneers at Acrisure Stadium. Currently, the Steelers sit at 1-4 so every game moving forward is a must-win if they’re aiming for anything other than a top five pick in next year’s draft.