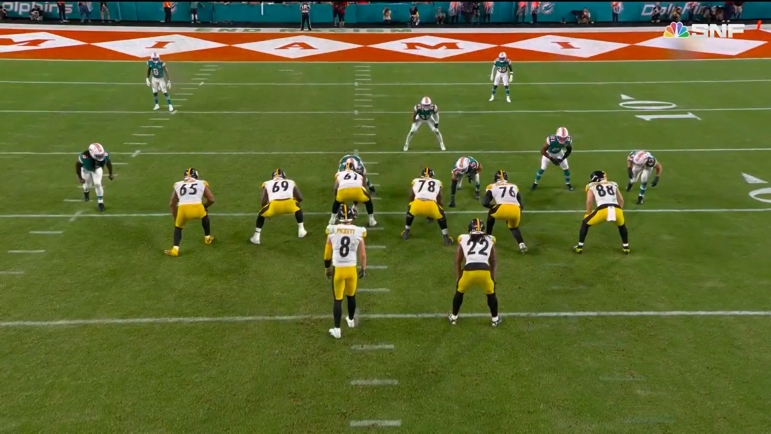 Heading into the Sunday Night Football matchup with the Miami Dolphins inside Hard Rock Stadium, much of the focus on the game dealt with the return of Dolphins quarterback Tua Tagovailoa and the explosiveness of the Dolphins’ offense getting back to its early-season form.

Outside of that, not much was paid attention to the matchup in the trenches against a retooling Pittsburgh Steelers’ offensive line against a stout, athletic Dolphins’ defensive front.

For the most part, the Steelers’ offensive line held up well, providing ample time for rookie quarterback Kenny Pickett to throw while also opening up rushing lanes for second-year running back Najee Harris to have his second-best output of the season on the ground.

Still, despite the decent day overall, the Steelers offensive line dropped two spots in the latest positional rankings from Pro Football Focus’ Sam Monson on Wednesday, who cited three of the Steelers’ offensive linemen grading in the 40s in pass blocking against the Dolphins in PFF’s metrics.

Currently, the Steelers sit at No. 21 in Monson’s rankings for PFF, behind the New Orleans Saints but just ahead of the Buffalo Bills overall.

“Miami’s pass rush overwhelmed Pittsburgh’s line in Week 7, with three of the starters earning PFF pass-blocking game grades in the 40.0s,” Monson writes for PFF. “No member of the line has allowed more than 15 pressures this season, but they have a tipping point where they are overmatched against good pass-rush units.”

Watching the game live, then going back through it with a fine-tooth comb, I never really came away feeling that the Dolphins’ pass rush “overwhelmed” Pittsburgh. Sure, there were some poor reps, but Pickett wasn’t under duress much in the game. He was sacked just twice and hit six total times on 46 drop backs.

That doesn’t scream “overwhelmed” but Monson is mostly basing that on the grades guys like Chukwuma Okorafor, Mason Cole and Dan Moore Jr. earned in the loss. Okorafor graded out at 47.5 in pass protection, while Moore Jr. and Cole both earned identical 43.6 pass blocking scores.

It’s a strange grading system, one that consistently raises questions as to what goes into a grade on a certain play, and what is deemed a good or bad play in their system, but that’s how the group was viewed for their performance in Week 7 against the Dolphins, right or wrong.

It won’t get any easier for the black and gold this week either, as a trip to Philadelphia to take on the undefeated Eagles looms large. Philadelphia has a great defensive front under second-year head coach Nick Sirianni, led by guys such as Fletcher Cox, Javon Hargrave, Brandon Graham, and more, not to mention hulking rookie defensive tackle Jordan Davis.