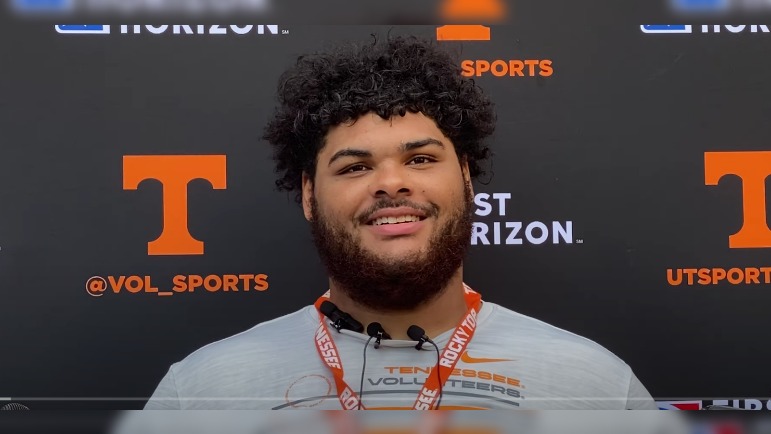 The Volunteers shocked the college football world Saturday afternoon, knocking off the Crimson Tide who were previously winners of 15-straight games over Tennessee on a walk-off field goal 52-49. QB Hendon Hooker looked like a Heisman candidate with another stellar performance and WR Jalin Hyatt posted the best receiving game in Tennessee history, but RT #58 Darnell Wright stood out as well for impressive performance against a talented Bama defensive front. The 6’6, 335lb senior helped the Volunteers control the LOS to the tune of 182 rushing yards and protected Hooker in the passing game, allowing him to throw for 385 yards and five scores.

Wright particularly looked impressive against All-American EDGE Will Anderson Jr., keeping him quiet for most of the game. Wright was able to keep the potential #1 overall pick next spring at bey thanks to his steadiness in his technique in pass protection combined with his sheer size and strength. Watch this pass rep as Wright keeps Anderson in front of him, mirroring him perfectly with a wide base as he cuts off the edge rusher from getting the corner, landing his punch inside Anderson’s chest and stays on him as Anderson tries to counter back inside with a spin, giving Hooker time to find man for the first down.

Here is another example of Wright stalling Anderson’s rush, using his size and strength to anchor in against the pass rush as the RG comes over to help. Anderson fails to get any penetration as Hooker decides to keep it and scramble for the first down with his legs.

On this TD pass from Hooker, we see Wright give more ground to Anderson who hits him with a bull rush as Wright could play with better hip and knee bend at the start of the rep. Still, wright manages to stall the rush enough to give Hooker time to find Jalin Hyatt downfield for the TD, taking a hop step and getting extended by his torso while digging his heels into the ground to stop Anderson’s rush.

Darnell Wright also did a good job of picking up stunts and twists by the Bama defensive front in the contest. Here we see the DT and DE execute a twist on the right side as Wright gives #94 D.J. Dale a shoulder with his eyes on Anderson who goes inside. Wright gets out of position due to having his focus on Anderson but manages to work back in-front of Dale to keep Hooker clean, giving time to find Hyatt for another long TD bomb.

On this TD pass to Hyatt, we see Wright better execute against the twist than in the first clip as he sees Anderson stall, waiting for Dale to crash down before he loops inside. The RG passes Dale off to Wright who neutralizes the rush with good feet and arms extended as Hooker again finds Hyatt for a long catch-and-run TD.

When it came to the running game Saturday against the Crimson Tide, Wright represented himself well as a people mover upfront when his technique was sound. His size and demeanor make him an ideal man to run behind, especially near the goal line like on this TD run where he down blocks the DT, clearing a lane for the fullback to take the hand off and stretch over the plane for six.

Here is another example of Tennessee running behind Wright near the end zone as he perfectly executes a combo block on Dale before climbing to the second level to pick up the linebacker, creating a running lane that the H-Back takes the shovel pass from Hooker right off Wright’s back to hit pay dirt.

One negative that stood out from Wright’s performance Saturday was a bad tendency to drop his head and lunge into blocks, leading to whiffs. Here is one example on a Hooker read option where he picks up the first down, but Wright misses his block at the second level as he shoots forward with head down and shoulders over his feet, missing the linebacker completely.

We see another example of a whiffed block by Wright here as he pulls from right to left across the LOS to clear out the linebacker. Wright again drops his eyes and lunges into the defender looking for the blow-up block, resulting in him getting sidestepped by #10 Henry To’oto’o. Still, Wright shows his mobility to pull from the tackle spot and does enough to take To’oto’o out of the play, allowing the runner to pick up the first down as he fights for extra yardage on contact.

Overall, it was a strong performance from Darnell Wright who faced the vaunted Bama defensive front headlined by Will Anderson Jr. and kept him from wreaking the game. Wright’s pass protection was key for Hendon Hooker to have the stellar performance that he did along with being a key component of the Volunteers’ run game that kept moving the chains and managed to keep QB Bryce Young on the sideline.

Wright exposed some of his issues in this outing, namely the need to play with more consistent hip/knee bend and to keep his head up and not lunge on his run fits. Still, the SEC OL of the Week has started 45 games in his college career thus far, having the experience and positional versatility to play both inside and outside with 25 starts at RT, two at RG, and 13 at LT. Possessing the size and play demeanor to match a power/gap running scheme, Wright showed scouts that his 2022 season has been no fluke after this performance and that he should be considered in the early stages of the 2023 NFL Draft.

What are your thoughts on Darnell Wright’s performance against Alabama? Do you think he showcased the skill set of a starting-caliber offensive lineman in the league? Do you think he should be in-play for the Pittsburgh Steelers in the early stages of the draft? Please leave your thoughts in the comments section below and thanks again for reading!