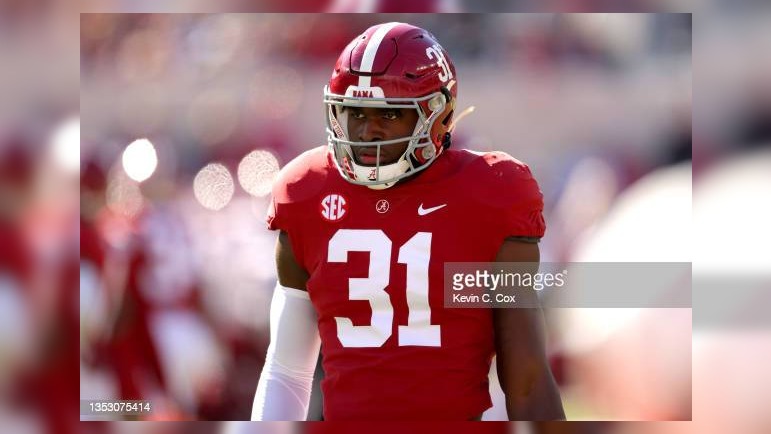 Auburn is attempting to find themselves after a 3-3 start to the season but will face a daunting task of traveling to Ole Miss this weekend to do battle with the 6-0 Rebels.

For the Tigers, EDGE #29 Derick Hall is a name that flashed last season with 12 ½ tackles for loss and nine sacks. He is an explosive athlete off the edge that can be a handful for most OTs he will face thanks to his good get off, speed around the edge, and relentless pursuit of the passer. Auburn will line him up on the edge as well as off-ball and in the gap to get him advantageous matchups against guards and centers that he can easily defeat with speed. Ole Miss has been dominating upfront on the LOS so far this season, meaning that Hall will have to play his best for Auburn to come out of Oxford with the upset.

Derick Hall was all over field for @AuburnFootball on Saturday and they needed him to be. Great speed-to-power long arm rush here against one of top pass protecting left tackles in 2023 draft. @derick_hall9 has pair of heaviest hands in CFB and he knows how to use them. 🧵 1/3 https://t.co/3tQ0QItywr pic.twitter.com/FNW21IsiiI

One of those linemen the Rebels will be relying on to set the tone at the LOS is OG #64 Nick Broeker. After playing left tackle for the Rebels for three seasons, Broeker moved inside to left guard for his senior season and has hasn’t missed a beat. The former freshman All-American in on the Outland trophy watch list thanks to his impressive blend of strength at the point of attack, flexibility and knee bend, movement skills in the run game and in pass protection, and refined technique. He has become known for his pancake blocks and will look to dish out several of those in this matchup as one of the best senior IOL in the country.

The Big Ten will feature a clash of two of the conference’s best team Saturday with the Nittnay Lions of Penn State traveling to Ann Arbor looking to upset the fifth-ranked Michigan Wolverines.

The Nittnay Lions have several 2023 NFL Draft prospects, but one that could be a fast riser this fall and into the spring is OT #74 Olumuyiwa Fashanu. The 6’6, 308lb redshirt sophomore has flashed on tape thus far in 2022 after starting only one game last season. He has the size and length you look for at the blindside position on the offensive line and has the athleticism and footwork to mirror pass rushers in pass protection. He sets the depth of the pocket well and has quick feet to cut rushers off their path. A solid run blocker as well, Fashanu could vault himself near the top of the OT ranking should he decide to declare early after the season.

The Wolverines will rely on their running game and solid defense to dictate the pace of this game, counting on #5 DB DJ Turner to keep a lid on things in the secondary.  The 6’0, 180lb senior saw action as a starter on defense for the first-time last season as a starter and has now become one of the leaders on the backend for the Wolverines defense. He is a gritty defender that looks to get active in the run game as well as having the movement skills to cover opposing team’s #1 WRs. His long speed and overall athleticism will be called into question at the next level, but he will be trusted by the Maize and Blue to come up big this weekend.

Michigan DB #5 DJ Turner has been a name to watch this season for the Wolverines after snagging two INTs in 2021. Makes a great play on the ball here against Maryland, getting position to step in-front of the receiver for the pick. #NFLDraftpic.twitter.com/FE9WGPPw4f

The Crimson Tide edged out Texas A&M last week at home and now will have to defeat the sixth-ranked Tennessee Volunteers on the road in Knoxville this Saturday.

Normally, listing a player as talented as EDGE #31 Will Anderson Jr. as a potential draft prospect for the Steelers would be wishful thinking. However, given the team’s dismal start to the season, here we are talking about one of the best EDGE prospects since Vin Miller as a legit possibility for the Steelers should this trend continue.

Anderson is a Heisman-worthy candidate playing on defense, having logged 101 tackles and 17.5 sacks last season and currently stands at five QB takedowns along with a pick six in 2022. He is a dynamic presence off the edge, defending the run well and being nearly unblockable for college OTs in his pursuit of the QB. Look for him to be his normal game wrecker self Saturday as he attempts to wreak havoc in the Volunteer backfield.

Will Anderson Jr. is going to keep contain and make sure he doesn't have a handoff, then get a hand up to force this QB to run. That gets him the sack. Fundamentally sound play. Not just overwhelming traits. pic.twitter.com/Dv3ghEhFjV

For the Volunteers, EDGE #6 Byron Young will look to match our outplay Anderson in terms of his disruptiveness in this game. The 6’3, 245lb senior has 3.5 sacks thus far in 2022 and currently in near the top of the conference in pressures per game. He plays with a high motor on nearly every snap regardless of its run or pass, flying to the football with the twitchy get off that gives OTs nightmares. He will have a tough test being pitted against the Crimson Tide offensive line, but should be a force Bama has to deal with if Tennessee wishes to knock of the kings of the SEC.

SEC leaders in pressures/game in 2022:

With his athletic twitch and motor, Young continues to rise. 📈📈📈 pic.twitter.com/avPY3np5Ze

The Wolfpack are coming off a tough loss to the ACC rival Clemson Tigers last week, giving them their first loss of the season. However, they will have to quickly regroup as they prepare to take on a 5-0 Syracuse squad posting its best start in well over a decade.

NC State has one of the best OLs in the country according to the statistics which is led by C #50 Grant Gibson leading the charge from the pivot. The 6’1, 310lb senior has started 40 games over the course of the last four years and has done well as a pass protector despite being undersized. His strength comes in the running game, however, as his footwork and body control to pull from the center spot, seal off defenders, and climb to the second level of the defense is pure artwork given the degree of difficulty of blocks he is asked to execute. His size will knock him down some boards, but Gibson is a battle-tested veteran who appears to be a perfect fit for a zone running scheme.

The Orange have been riding hot due in-part to the efforts of DB #8 Garrett Williams in the secondary. The 6’0, 189lb junior was widely touted as one of the top cover men in this draft class prior to the 2022 season and Williams has lived up to the hype so far, posting 30 total stops, a sack, three PBUs, two INTs, a forced fumble, and two fumble recoveries. Williams has a nose for the football, whether it be in coverage or as a downhill defender against the run. He has great athleticism paired with the ball skills to become a NFL-caliber outside CB or potentially use his range as a centerfield safety should teams prefer him there in their scheme.

The Pac-12 features a Top 25 matchup between the USC Trojans and Utah Utes in Salt Lake City.

The Trojans are off to their best start in years thanks to a dynamic offense full of NFL talent as well as a defense where DL #49 Tuli Tuipulotu has stolen the show. The 6’4, 290lb junior currently leads the nation in sacks (7) and is second nationally in tackles for a loss (12.5) after his monster performance against Washington State where he racked up three QB takedowns. He will face much stiffer competition against a USC offensive front, but if he keeps this hot streak going, Tuipulotu’s stock will continue to rise as a disruptive force that can play up-and-down the LOS.

For the Utes, you need to direct your attention to CB #1 Clark Philips III just like the USC passing game will Saturday night. The 5’10, 183lb cover man is only a redshirt sophomore, but he has quickly become one of the country’s most feared defenders in the secondary. He showed promise last season but has taken his game to another level to the tune of five INTs, two of which he has returned for scores. Philips is a good enough athlete to run with most receivers in coverage stride for stride and possesses the aggressiveness, ball skills, and instincts to be a ballhawk who makes splash plays. This weekend Philips will face his toughest test yet covering WRs Jordan Addison and Mario Williams.

Pick 6 👀@Utah_Football takes one back with 31 seconds to go pic.twitter.com/rsaJjVukEq