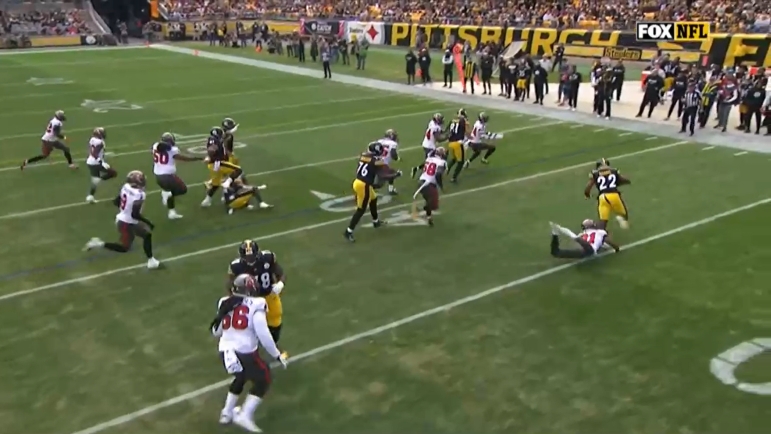 Has it become fashionable to lay harsh criticisms at the feet of Pittsburgh Steelers running back Najee Harris? It certainly seems so at times, though the reality is that his draft pedigree relative to his production is not doing himself any favors. He has not even found the same success this season as he did as a rookie, notwithstanding complications from a foot injury.

The latest to take a swing at Harris and knock him down a peg is Ross Tucker, an NFL analyst who appeared on 93.7 The Fan yesterday. An area native, he had some strong and, um, local opinions about the Steelers’ bell cow and who he should look like.

“I think he’s kind of just a guy”, he said of the second-year back. “I don’t think Najee Harris knows what he is. When I watch Najee Harris, he looks to be like he thinks he’s like a scat back. He’s like jumping around in the backfield, these jump cuts. Hey, Najee. You’re 230 pounds and you play running back for the Pittsburgh Steelers. Hit up in there and get a tough 3-5 yards. I think Najee does not realize what he is”.

Now, there is something in here, to Tucker’s credit. Harris has not been the sort of north-and-south runner that we would logically assume is an area in which he would excel. He has also had difficulties in properly diagnosing the holes through which to run, at times.

We cannot ignore the fact that he has played through most of the season still recovering from a significant Lisfranc injury that essentially robbed him of training camp and the preseason (and Tucker did not, either, for what it’s worth). He has only played a game or two since removing a plate in his cleat that stabilized his foot, so it’s reasonable to expect that he will show improvement over the second half of the season.

But this little approaches Tucker’s central criticism, which is simply that he doesn’t believe Harris plays to his body type. He is a rather large back, as is somebody like Derrick Henry of course, but he doesn’t have Henry’s speed, so he’s not the model. Nor is even Le’Veon Bell.

“Instead of running like Bell did, maybe they could go ahead and give him some tape of Barry Foster and Bam Morris and Jerome Bettis”, Tucker suggested, “and he can get a better idea of what especially this offense needs him to be. I mean, how often is it gonna be 2nd and 12?”.

Harris does have 10 runs for negative yardage thus far this season, five of which have come on 1st and 10, four of which produced 2nd and 12 or worse. He has another 19 carries on the season in which he was stopped for no gain.

Tucker addressed the “Najee apologists” who lay the blame at the feet of the offensive line for Harris’ struggles this season. While there is, again, validity in that, he responded that if he would simply play to his size, he should still be able to push the pile forward a few yards. Admittedly, something rookie college free agent Jaylen Warren has been able to do.