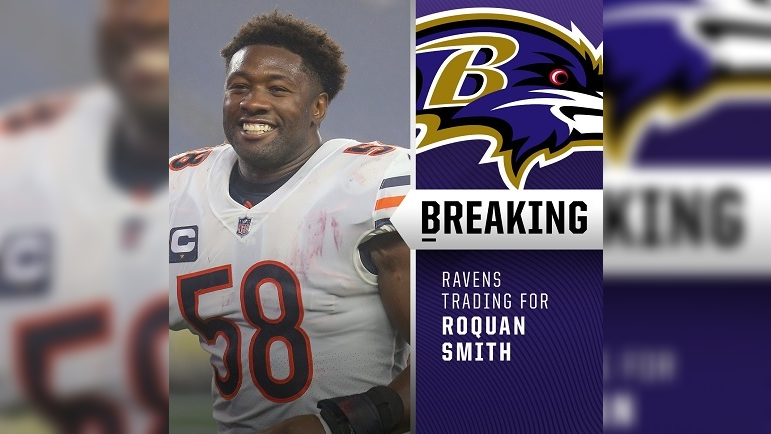 Bears and Ravens agree to trade for Roquan Smith

Smith held out and requested a trade during training camp, but eventually reported to the team and has enjoyed a solid season thus far, with 83 total tackles, 2.5 sacks and two interceptions to his credit.

Pittsburgh will face Smith and Baltimore twice this season, first in Week 14 and again in Week 17. Smith is in the last year of his contract and will bolster a Ravens defense that includes Patrick Queen, Justin Houston and Marcus Peters, among others. Queen, Houston and Smith will form an incredibly dangerous linebacker trio for the Ravens.

In exchange for Smith, the Ravens gave up a second-round draft pick and a fifth-round draft pick, per ESPN’s Adam Schefter, as well as linebacker A.J. Klein. All told, that’s a solid return for the Bears given that Smith probably wouldn’t have re-signed with Chicago this offseason, and for Baltimore, it’s not too much to give up to acquire an All-Pro linebacker for a team that has Super Bowl hopes in their last year before they have to give Lamar Jackson a long-term salary. If Chicago kept Smith and let him walk, they likely would’ve gotten a third-round comp pick in 2024. Instead, the team gets a higher pick in the second and an additional fifth. Both picks are for the 2023 NFL Draft, so Chicago has a chance to get better as soon as this offseason.

It’ll be interesting to see how much the Smith acquisition will impact the 5-3 AFC North-leading Ravens, who are coming off a win over the Tampa Bay Buccaneers on Thursday Night Football. Smith’s first opportunity to see the field as a member of the Ravens will be next Monday night as the Ravens and Saints play on Monday Night Football.