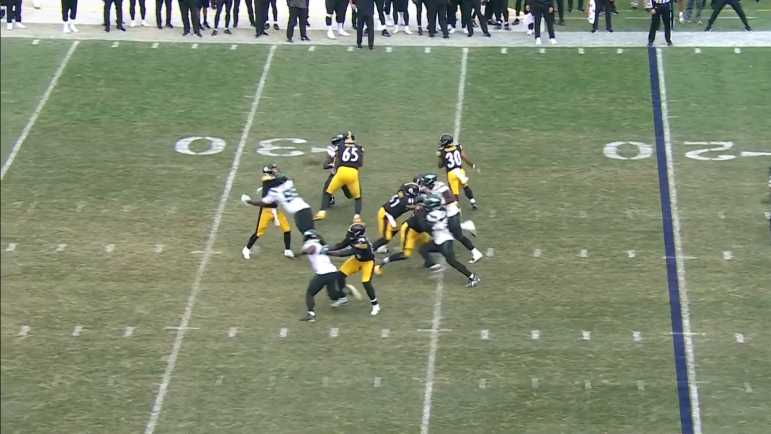 We have spent a lot of time talking about Pittsburgh Steelers rookie quarterback Kenny Pickett, and talking about people talking about Pickett, through the first three weeks of the season, during which he never took a step on the field. Why should we expect it to be any different after he makes his NFL debut?

It won’t, of course. We all got what we were waiting for yesterday when head coach Mike Tomlin pulled the trigger and inserted the first-round pick into the game coming out after halftime, replacing Mitch Trubisky in the starting lineup.

He inherited a 10-6 deficit, the six points coming off of two 50-plus-yard field goals from kicker Chris Boswell, and he responded with a pair of touchdowns, both on quarterback runs. One was admittedly on a ‘drive’ that began inside the Jets’ five-yard line following a turnover, but he got five drives and he got into the end zone twice.

The most impressive play was the one that came right before the second score. Facing a third and long just outside the red zone, the rookie stood  in the pocket and took a wallop of a hit while delivering a beautiful ball to tight end Pat Freiermuth for an 18-yard gain down to the two.

“He’s a gamer. That’s why they drafted him in the first round is to make those plays”, the second-year tight end who was on the other end of that pass told reporters in the locker room after the game, according to video from the team’s website. “He’s gonna stand in the pocket and deliver when needed”.

It’s something we’ve already talked about, but it’s also an important topic. It’s something that even head coach Mike Tomlin acknowledged coming into this game that he agreed his then-starter, Mitch Trubisky, could be doing better.

Now his rookie starter is doing it, and it’s something he’s never looked uncomfortable doing, putting forth similar efforts during his promising preseason play. Because for him, it just comes with the territory of being the quarterback.

It is his job to do that, certainly, and he’ll probably have to at least a couple times a game behind this offensive line, which is admittedly a better pass-protecting group than anticipated entering the regular season. And it also looked better in the second half blocking for a quarterback who didn’t make it a habit of rolling into pressure.