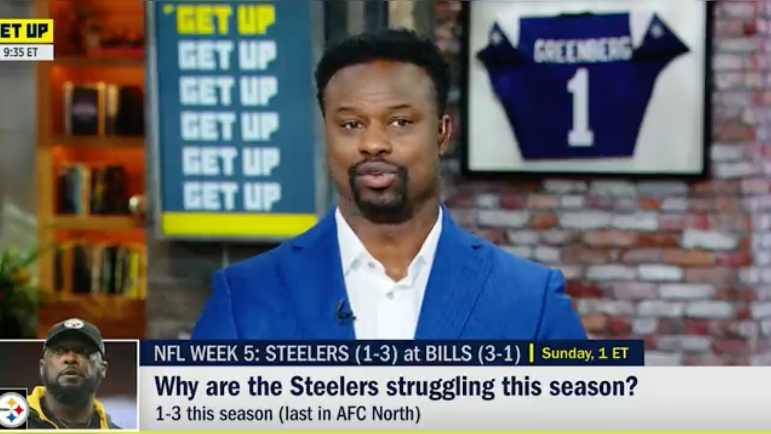 Things aren’t going well for the Pittsburgh Steelers through four weeks of the season, sitting at 1-3 and staring down major issues on both sides of the football at the moment.

The Steelers under head coach Mike Tomlin attempted to fix some of those issues offensively by making the switch to rookie first-round pick Kenny Pickett under center moving forward in 2022. Defensively, things haven’t been the same since star outside linebacker T.J. Watt got hurt in Week 1 against the Cincinnati Bengals as the Steelers’ defense has struggled to get stops late in games, resulting in a three-game losing streak.

Injuries aren’t helping either, but the issue with the Steelers at the moment in the midst of their 1-3 start to the season isn’t the absence of Watt or the below average play that Mitch Trubisky showed through 3.5 games offensively, or even some special teams gaffs. No, according to ESPN’s Bart Scott on Get Up Thursday morning, the struggles are due to the Steelers “reaching” on a “bad pick” in Pickett in the first round at No. 20 overall.

“They don’t have a good offensive line. I think they reached for Kenny Pickett; I don’t think they should have reached for Kenny Pickett,” Scott said on Get Up Thursday morning, according to video via the Get Up Twitter page. “In year where everyone knew it was going to be a reset year, losing a great, Hall of Fame quarterback there’s always a reset year. For them to think that getting a quarterback at pick 20 and Mitchell Trubisky was gonna be there answer…and not being in a position to take one of these quarterbacks next year? Where do you go if you’re sitting at fourth and Bryce Young, C.J. Stroud, one of those guys are there?

“Sometimes it’s about bad picks, and this is the first time — it’s rare for the Steelers, that bad picking in Kenny Pickett happened.”

The Steelers’ offensive line continues to catch strays from talking heads on ESPN despite their improvements early in the season and overall surprise level of play through four weeks. The offensive line isn’t the reason the Steelers are 1-3. Neither is the quarterback position solely the reason the Steelers are 1-3, but for Scott to go on ESPN and blame the selection of Pickett at No. 20 overall is absurd.

Scott went on to knock Pickett’s age, stating that if he were in college at 23 years old, he would have been the first overall pick as Pickett was a man playing amongst boys.

Adding onto the absurdity of the overall discussion regarding the Steelers, Scott stated that Pickett is already pretty close to who he’s going to be in the NFL due to his age and how NFL-ready he was coming out of Pittsburgh. But he kept coming back to that No. 20 overall selection in the end, stating that the Steelers should have gone with an offensive lineman there, rather than Pickett.

“It’s tough to transition from a Hall of Fame quarterback, and I just don’t think you’re finding that at pick 20.”

There you have it: according to prominent talking heads on ESPN, the Steelers are 1-3 because they selected Pickett at No. 20 overall, rather than, say, someone like Cowboys left tackle Tyler Smith (drafted as a guard), New England left guard Cole Strange or Philadelphia center Cam Jurgens? Those were the only three offensive linemen to go in the draft between pick 20 of Pickett for the Steelers and pick No. 52 of wide receiver George Pickens for the black and gold.