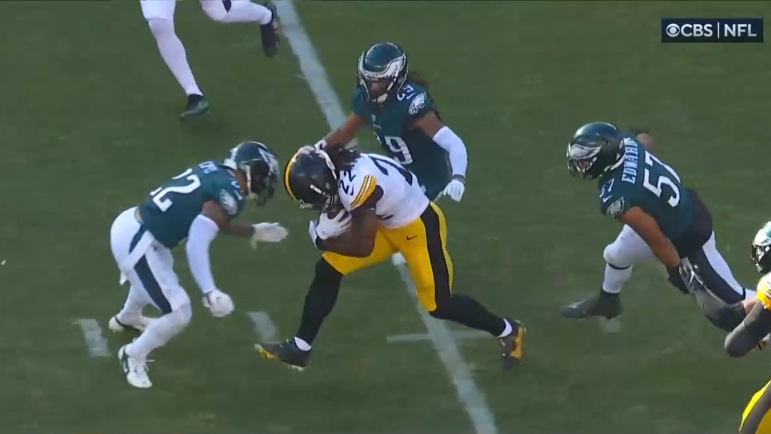 Najee Harris hasn’t had a very good 2022 season. From literally his second carry of padded training camp practices, he’s dealt with injuries and poor overall production. Arguably the league’s most inefficient runner, Harris preached the need for accountability. He also understands the reality that no running back will look good if there’s no running room ahead of him. Speaking to reporters, Harris was asked about his halftime statline of four carries for zero yards.

As shared by the 93.7 The Fan’s Twitter account, Harris said a steady run game falls on more than his shoulders.

#Steelers Najee Harris on 4 carries in 1st half-“I ain’t never really had that type of stat. I can’t make the hole. I can’t do everything. I try to control what I can control. I don’t know what more I can do other than vocalize it.”

“I can’t make the hole. I can’t do everything. I try to control what I can control. I don’t know what more I can do other than vocalize it.”

Harris seems a bit upset at his lack of involvement in the offense, Pittsburgh again coming out throwing, and certainly at the lack of production on the few carries he got. His first four carries went for zero, one yard, negative one yard, and zero, the last one being an effort play just to return to the line of scrimmage.

Thanks to a season-long 18-yard run in the second half, Harris finished the game with a slightly more respectable line, eight carries for 32 yards while catching several check-downs in the passing game. While some of his work came in garbage time, rookie Jaylen Warren continues to be the more effective runner with a style more suited to the Steelers’ offense, getting downhill and picking up what he can behind an offensive line that struggles to open up running room.

Harris is a unique athlete for his frame and size with the ability to hurdle and occasionally making defenders miss. He’s played too passively this season. That was evident on a 3rd and 2 reception in the second half, dancing and juking instead of plowing ahead. Instead of positive yards and a potential first down, Harris was tackled at the line of scrimmage, forcing Pittsburgh to go for it on fourth down.

On the season, Harris is still averaging a paltry 3.3 yards per carry with just one rushing score. The steel plate in the toe of his shoe that may have hindered him early in the season has long been removed, and while Harris has made a couple more plays in space, the Steelers still lack a ground game.

Harris is correct in saying the holes weren’t there Sunday, but regardless of reason, the Steelers’ offense will continue being league-worst until it gains more consistency on the ground. Pittsburgh has zero run-game identity, no core concepts it can lean on, and has spent the first eight games throwing everything at the wall and seeing what sticks. So far, nothing has. Barring a drastic change, Harris, this run game, and the Steelers’ offense are on pace to have their worst season in 52 years.