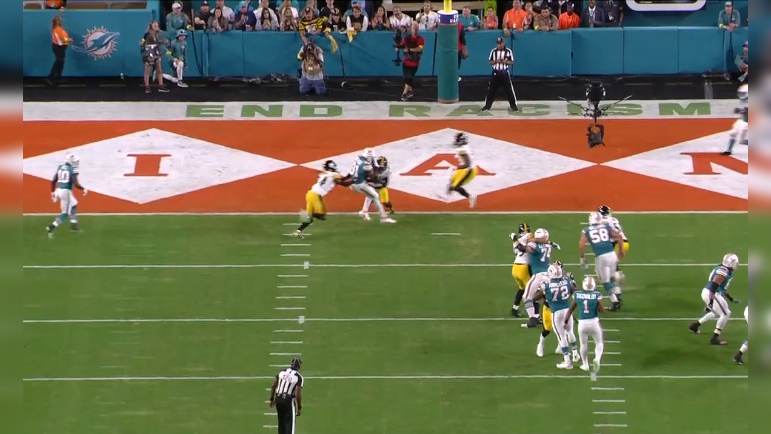 Early on in his career, Pittsburgh Steelers star safety Minkah Fitzpatrick has had some huge hits and some key interceptions in the black and gold.

Oftentimes though, it feels like those huge hits from the safety position have been flagged in today’s NFL. Think back to Week 1 against the Cincinnati Bengals. Fitzpatrick was flagged twice for hits on Cincinnati receiver Tyler Boyd, one of which came late in the game and set up the Bengals for a score in a close game.

Even dating back to last season on the road in Minnesota against the Vikings, Fitzpatrick was called for unnecessary roughness for a hit in the end zone. It’s been a point of frustration for him early in his career, but turns out he may have learned from some of the previous flags.

Sunday night against the Miami Dolphins inside Hard Rock Stadium on Sunday Night Football, Fitzpatrick had another trademark play from his center field role, dislodging Miami running back Raheem Mostert from the football near the goal line on a crossing route, forcing the Dolphins to settle for a field goal.

It’s a play Fitzpatrick has made many times in his career, but this one was different. This time, Fitzpatrick earned praise for the hit, which the NFL deemed textbook with no flags, eventually earning him the NFL’s “Way to Play” award for Week 7, presented on Thursday morning during Good Morning Football.

The honor goes weekly to a player in the league who exemplifies proper technique on the field. The winner receives a personal, hand-written letter from Commissioner Roger Goodell, and a $5,000 donation to a high school or youth program of their choice.

“I want you to focus on the way Minkah Fitzpatrick detaches this receiver from the football here,” O’Hara says while breaking down the play, according to video via NFL.com. “The head is out when he makes this hit. Look at the shoulder. He doesn’t launch himself, he doesn’t hit the head or neck area. Look at how he lowers his target aiming point, leads with his shoulder and hits the receiver’s chest.

This truly was a textbook play from Fitzpatrick and matched exactly what the NFL wants from defenders in today’s NFL. The big hits can still be part of the game, but taking away the head shots and launching at defenseless receivers has been a major talking point. After being flagged in the past for plays in which he appeared to do everything right, Fitzpatrick was finally rewarded with a non-call in this instance, blowing up Mostert through the chest at the catch point without using his head and without launching.

As you can see in the multiple clips above, Fitzpatrick does a fantastic job of driving on the throw near the goal line, getting his head cleared and across Mostert’s body and exploding through the running back with his shoulder, avoiding any sort of contact with the head or neck area, going right through the preferred target area that the league has made a major point of emphasis.

When done right, big hits can still be a massive part of the game and really set a tone for a defense while causing an offense to avoid certain areas of the field.