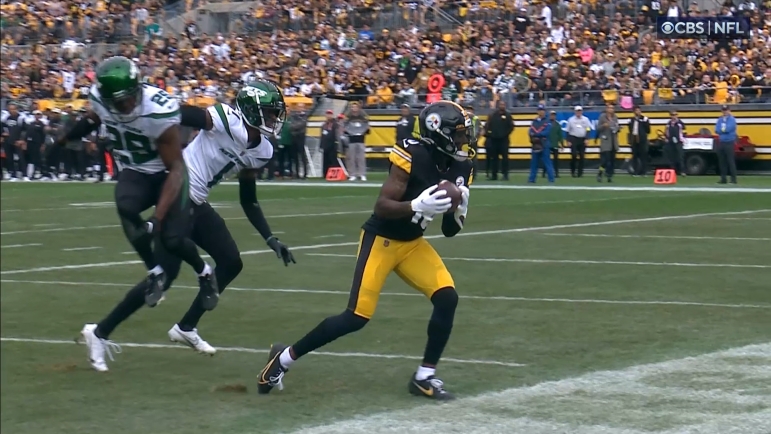 Pittsburgh Steelers wide receiver Diontae Johnson certainly didn’t light up the stat sheet in the team’s Week 4 home loss to the New York Jets, as he only caught two passes in that contest for 11 yards on four targets. Additionally, Johnson’s first target in that game against the Jets went off his hands and resulted in an interception, and another target, a pass he caught in the end zone, was ruled to be out of bounds. As the Steelers now prepare to play the Buffalo Bills on Sunday, head coach Mike Tomlin was asked during his weekly show if there is anything that can be done to get Johnson back on track and thus more involved in the passing game.

Johnson’s 11 yards receiving against the Jets last Sunday was his lowest output in a game since Week 8 of the 2020 season, when caught just one pass for six yards against the Baltimore Ravens. That lone completion in that contest came with just 1:52 left in the fourth quarter.

As the Steelers prepare to play the Bills on Sunday, Johnson enters that contest having caught 23 passes for 207 yards for the season. He has yet to catch a touchdown pass this season, and the same goes for the other Steelers’ wide receivers. Hopefully that dubious stat comes to an end on Sunday in Buffalo, with rookie quarterback Kenny Pickett making his first start of his career.

It’s important to note that the Bills will be down two key players in their secondary on Sunday, as cornerback Christian Benford and safety Jordan Poyer will both miss the contest due to injuries. That means that Pittsburgh product Dane Jackson will make another start at cornerback on Sunday alongside rookie Kaiir Elam.

Last season, the Bills’ top two starting cornerbacks were Tre’Davious White and Levi Wallace when they played the Steelers, and Johnson caught five passes for 36 yards and a touchdown on 10 total targets in that contest. Wallace is obviously now a member of the Steelers, while White has yet to play this season, as he has been rehabbing on the Bills’ Reserve/PUP list.

For the Steelers to upset the Bills on Sunday, Johnson might need to have a big game, so look for Pickett to go to him early and often in that contest, hopefully with success more times than not.

“Just rest assured that Diontae is always a significant component of our plans,” Tomlin told Pompeani.