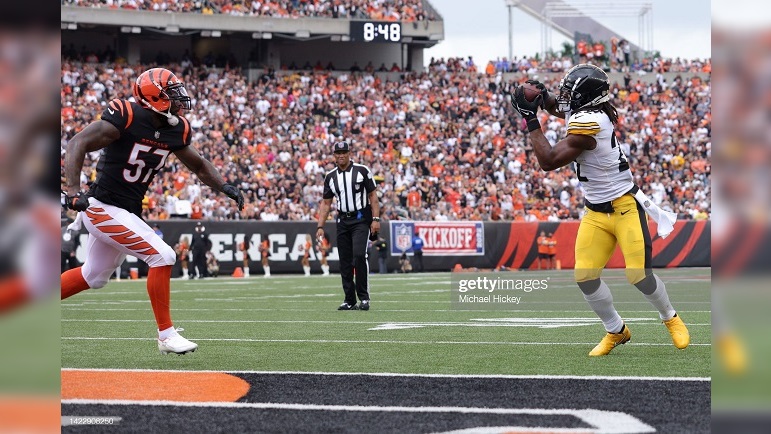 Through the first four weeks of the 2022 regular season, the Pittsburgh Steelers have not used their running backs very much in the passing game. That fact is what probably led to Steelers offense coordinator Matt Canada being asked on Thursday if he thinks a more concerted effort needs to be made to use the running back position group more in that phase moving forward into the season and especially on the heels of Najee Harris catching 74 passes during his 2021 rookie season.

“Right. I think there’s points all the way around,” Canada said on Thursday, according to a transcript provided by the team. “It’s the fine balance of protection and making sure we’re doing a good job helping and sometimes that happens versus getting out. That’s a balance that certainly you could point to. We could do a lot of things better and more.”

While Canada really didn’t touch much on the subject in his answer, he must know that the team’s running backs indeed aren’t being used nearly enough as pass catchers out of the backfield heading into Week 5. In fact, Harris and Jaylen Warren have combined to catch just 13 passes for 55 yards and a touchdown through the team’s first four games. Last season through four games, Harris had accumulated 26 receptions for 178 yards and a touchdown just on his own.

Will we see a concerted effort to get Harris and Warren the football through the air more on Sunday against the Buffalo Bills? It probably wouldn’t be a bad idea to do just that, especially with rookie quarterback Kenny Pickett making his first career start against a top-rated Bills defense.

In case you’re curious, the Bills’ defense has only allowed 16 total receptions for 83 yards and a touchdown from opposing running backs so far this season. That’s obviously not bad at all. Even so, Canada and company should still try to get the football to either Harris or Warren through the air a little more than they have through the first four weeks of the season.