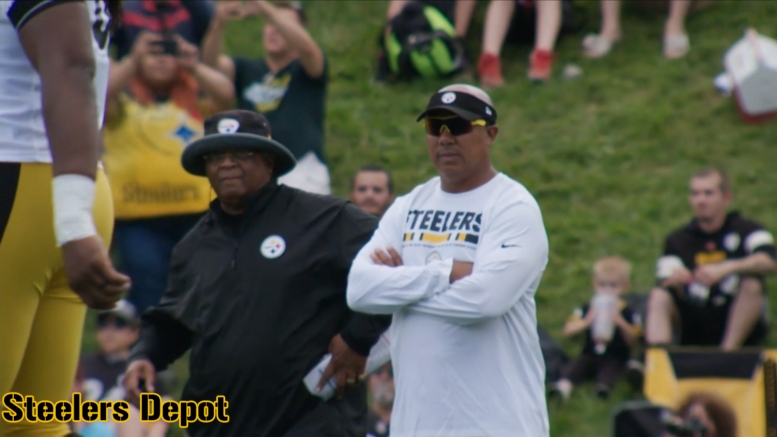 Pittsburgh Steelers head coach Mike Tomlin dragged his old Tampa Bay colleague Richard Mann out of semi-retirement in 2013 to coach their wide receivers, but he basically went on a year-to-year basis, always with the threat of retiring. He finally did after the 2017 season, during which year former Steelers great Hines Ward served as an offensive intern.

According to NFL reporter Aditi Kinkhabwala, Tomlin had interest in Ward being the Steelers’ next wide receivers coach at that point. And the feeling was mutual. But there were certain stipulations he could not agree to that at least partially played a role in him not getting that job. She told the story on 93.7 The Fan on Wednesday:

It didn’t happen because Hines was telling me then he wanted to have final say; he wanted to be able to hold everybody accountable the way that he wanted to. And at that point, AB [Antonio Brown] already had his own rule. And Hines had gone to Mike Tomlin and said, ‘I can’t do this unless I get to make the rules, unless everybody adheres to what I want and how I want it done’. And AB was already past that.

While that does sound somewhat damning, we know realistically that there are going to be plenty of players around the league who have their own ‘rules’, players who are going to have priority over their position coach if it became a battle of wills. Granted, Brown was an extreme example, and we see how that ended up—he would have only one more season in Pittsburgh, as it was.

The Steelers ended up hiring Darryl Drake to be their wide receivers coach beginning in 2018. He unfortunately served only one full season, actually passing away during training camp the following year. His full-time replacement, Ike Hilliard, was retained for only two seasons, with Frisman Jackson now in the wide receiver post.

As for Ward, he served as an offensive assistant for the New York Jets in 2019-20, and acted as wide receivers coach for Florida Atlantic University last year. He is currently affiliated with the XFL, serving as head coach and general manager for the San Antonio Brahmas.

Yet he has previously fully acknowledged that he wants to get back into the NFL at some point. Coaching is his profession of choice now, and I certainly wouldn’t be surprised if he finds his way into the league in the coaching ranks. Perhaps one day that will even be on the Steelers’ staff in the long run.