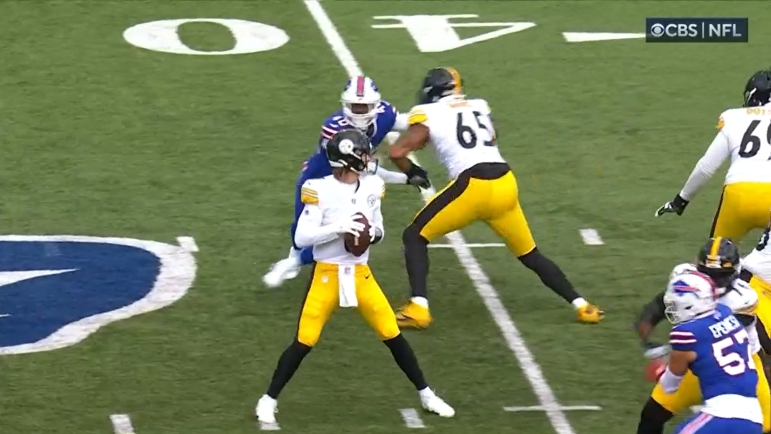 Scoring three points offensively in a 38-3 blowout loss is nothing to be pleased with. That said, the performance from rookie quarterback Kenny Pickett was at least something to build off of for Pittsburgh Steelers.

In the loss, Pickett completed 34-of-52 passes for 327 yards, but he did throw his fourth interception of the season in just a game and a half. That said, the Steelers dropped eight passes Sunday, making Pickett’s numbers look worse they could have been.

QB Kenny Pickett talks to the media about Week 6 vs. the Buccaneers, putting up points on offense, and more. pic.twitter.com/QEoBfsj7zf

Overall, Pickett was really decisive with the football, worked through his progressions very well, was accurate with the football and showed a real competitive fire that was expected of him coming out of the University of Pittsburgh. Quite honestly, everything he displayed on Sunday wasn’t a surprise. It was really who he was at Pitt.

Pickett’s performance wasn’t a surprise to personal QB coach Tony Racioppi either. Appearing on 93.7 The Fan’s morning show with hosts Colin Dunlap, Chris Mack and Dorin Dickerson, Racioppi praised Pickett for a variety of traits he showed in the blowout loss, which featured a strong performance from the rookie in a hostile environment in windy conditions.

“I thought I saw the decisiveness in the pocket. I think he played fast with his eyes and feet, going through progressions as best he could,” Racioppi said, according to audio via 93.7 The Fan. “I thought he was efficient with the football. I thought he was accurate. The 52 throws he made, not many weren’t where they were supposed to be, outside of maybe the pick and maybe three or four throws. You know, 34 completions with eight drops, that’s a pretty good day, especially in your first start, and a really tough place to play.”

Pickett was very decisive in the pocket, working through his reads and getting rid of the football in a timely fashion to hit receivers in stride. He showed great poise overall from the moment he stepped onto the field, which is exactly how he was in training camp, preseason and even entering the game in Week 4 against the New York Jets.

The moment isn’t too big for him. He’s calm, cool and collected, and has a great grasp of the playbook.

Good progression here but Kenny Pickett to hit Zach Gentry on 3rd down but I love the pocket movement here. Feels Von Miller's rush and hitches up. Difference between a sack/fumble and a conversion. Great instincts from a rookie. #Steelers pic.twitter.com/iUc7z8Rgls

Working through his reads without panicking in the pocket was a great sign, too. He knows he has to hang in the pocket and take some hits to make some plays, and he never let his eyes drop back to the pass rush. Some quarterbacks can do that, but not all. That was a positive sign.

He’ll have to keep displaying those traits Racioppi talked about to show he’s the guy moving forward, but even with the Steelers scoring just three points on Sunday, Pickett’s play showed enough to be excited about the immediate future moving forward with him under center.