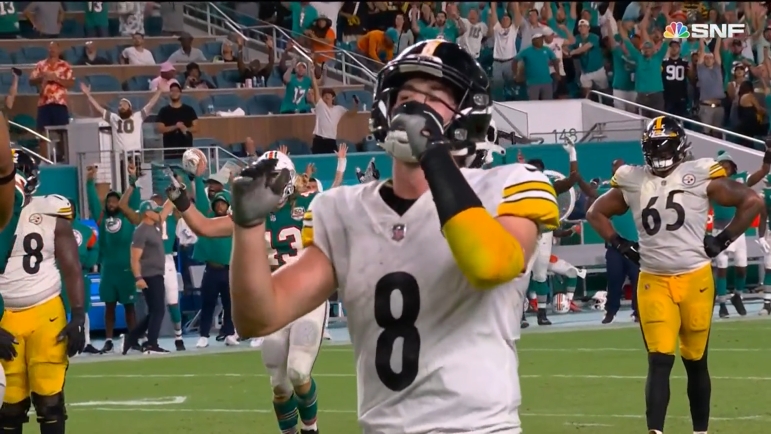 It’s not easy to transition from one major era of your team to another and win games along the way. Pittsburgh Steelers head coach Mike Tomlin is experiencing that this season firsthand in ways that he never has before.

Although he has been in a worse spot—his team started the 2013 season 2-6 before finishing 8-8—things are looking bleak seven games into his first year without Ben Roethlisberger under center. He’s already benched Mitch Trubisky at quarterback, and rookie first-round pick Kenny Pickett is making very costly mistakes no matter what promise he shows.

The team’s final two drives of the last game exemplify that. Both were possessions in which they gained over 50 yards and spanned double-digit plays. Both of them reached at least field goal range in what was a six-point game. Both of them ended with him throwing avoidable interceptions. So what do you end up taking away from them?

“There were definitely positives, but ‘almost’ doesn’t get you anything, right?”, Pickett said about the promising start of his final two drives that ended in crushing giveaways, via the team’s YouTube channel. “You want to go finish the game. I felt like we were efficient at the two-minute until the turnover play. It’s something that I’ll learn from, and I think we’ll learn from as a group. We’ll work on it, and we’ll get it right”.

It’s never a bad thing to be able to say the right things, and for the most part, the rookie has done that since before he was even drafted. But talk is cheap when you’re losing games and playing a significant role in those losses.

It is stating the obvious to point out that the story of Pickett’s career is far from being written; indeed, it’s only just beginning. In no way are his first four games necessarily indicative of what the future holds for him, either positively or negatively.

But these are the early experiences that he must learn from. As he said, these are mistakes that he must learn not to repeat. That comes not only with transitioning from the college level to the pros, but also in learning individual relationships with players, and simply experiencing numerous scenarios over and over again and getting a feel for how they are best played.

It’s not just on the quarterback, of course. It’s also about the receivers learning what he wants to do, what his tendencies are. The receiver’s job is ultimately to make the quarterback’s job as easy as possible. Do what he wants you to do and you’re ideally going to get the ball that you need to make the play. So putting yourself where he wants you to be is exactly what you need to be doing as often as possible.