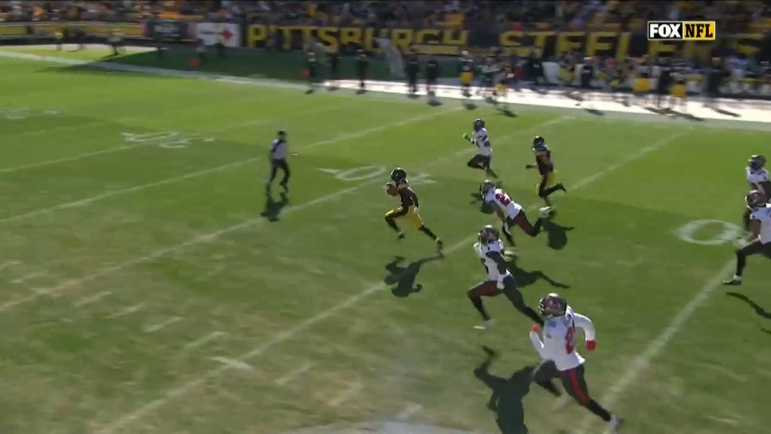 One week after being inserted into the starting lineup as the top kick returner and punt returner for the Pittsburgh Steelers, Steven Sims delivered on the promise he showed throughout the preseason.

Opening up the second half of Sunday’s matchup at Acrisure Stadium against the Tampa Bay Buccaneers and the Steelers holding a 10-9 lead, Sims ignited the home crowd and the home team with an impressive 89-yard kickoff return, setting the Steelers’ offense up at the Tampa Bay 12-yard line.

Though the kickoff return only led to a field goal from Chris Boswell as the Steelers’ offense stalled quickly, Sims fulfilled some of the promise he showed in the preseason with the long kickoff return, seemingly solidifying his spot in the lineup moving forward.

After the win over the Buccaneers, in which he also added a 24-yard punt return to midfield to set the Steelers up in great position, Sims was excited about his performance overall, stating to reporters that those explosive returns brings juice to the team, according to the official transcript.

“Those are the kind of plays we need. Plays that bring life to the team, bring a lot of energy to get everybody going, no matter how they are feeling,” Sims said to reporters from inside the locker room Sunday, according to the transcript released by the team. “Juice, it brings juice, and that’s just all I want to do.”

Turns out, Sims freelanced a bit on the return, taking advantage of something he saw earlier in the game from the Buccaneers’ coverage unit, allowing him to look back inside to the middle of the field, finding a big lane to sprint downfield through.

“I saw — we were running outside returns, and I saw inside, like I felt inside would be a good return,” Sims stated to reporters after the win, according to the official transcript. “The next one, I kind of just hit it myself. I just hit up inside and made a little move and I got it. [Jamel] Dean caught me, but Dean’s fast as hell.”

Granted, the Steelers’ offense didn’t do anything with it, moving it five yards on three plays before Boswell drilled a 25-yard field goal to make it a 13-9 game in favor of the Steelers. Still, that return provided the Steelers with a spark on all sides of the football.

A few special teams plays later, after the Steelers forced a three-and-out holding a 13-12 lead, Sims responded with a 24-yard punt return, giving the Steelers the ball at the Pittsburgh 48-yard line.

Though the Steelers went three-and-out on that drive after the punt return, the field position game was won due to the punt return, which ultimately helped the on the next drive, as Pittsburgh marched 71 yards in eight plays before Mitch Trubisky found Chase Claypool from six yards out for the touchdown, making it a 20-12 game, helping the Steelers eventually hold on.

The two plays Sims made on Sunday on special teams have been missing for the Steelers under longtime coordinator Danny Smith. While the blocked punts and blocked kicks are great, the Steelers were costing themselves in the return game, especially early in the season with Gunner Olszewski.

Sims changed all of that Sunday and provided the Steelers’ special teams with something to build on moving forward.