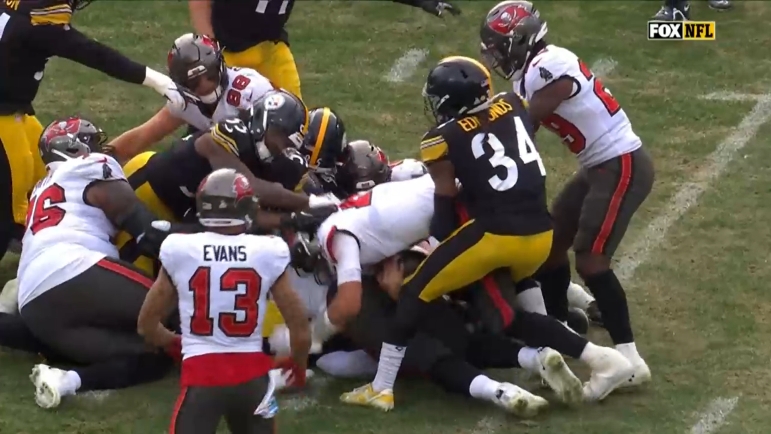 The Pittsburgh Steelers were given poor odds to come out victors on Sunday against the Tampa Bay Buccaneers. That was in no small part due to the litany of injuries in the secondary, with safety Minkah Fitzpatrick and their top three cornerbacks, Cameron Sutton, Ahkello Witherspoon, and Levi Wallace, all missing the game.

They had to start an ad-hoc secondary featuring backups and journeymen and call-ups from the practice squad, but it proved to be enough on the day to beat quarterback Tom Brady and a solid showing, both against the run and the pass, from the front seven. But defensive captain Cameron Heyward made sure to give the back end its plaudits.

“I think a game ball definitely has to go out to our secondary, man”, he said on the latest episode of his Not Just Football podcast, which posted tonight. “A lot of these guys we were just getting to learn, Josh Jackson, Elijah Riley, and others. James Pierre had to step up. Arthur Maulet”.

Pierre is in his third season with the Steelers as a former college free agent, but he had been demoted back to special teams after struggling defensively last season. He started on Sunday and by all accounts played well.

Opposite him was the aforementioned Jackson. A former second-round pick in his fifth season, he bounced around the league before landing on the Steelers’ practice squad in September. He also started and did a commendable job. But Heyward left special praise for the one veteran starter in the lineup.

“Terrell Edmunds had a big-boy game. He played downhill a lot of times, communicated on the back end”, he said. And others this week have also singled out Edmunds for the important role he played in keeping the makeshift secondary together as well.

Edmunds finished with a season-high 10 tackles, and was involved in four tackles that went for lost or no yardage (even though you’ll only see him officially credited with one tackle for loss in the game; he also had two assisted tackles for loss).

There is optimism that the secondary will be healthier going into Miami on Sunday, however, with head coach Mike Tomlin confirming that all of the injured players should be able to work this week. None of them practiced at all last week, Fitzpatrick with a knee, Sutton and Witherspoon with hamstrings, and Wallace with a concussion.

The Buccaneers credited not just the players in the secondary but the scheme that they ran within it for confusing them. Head coach Todd Bowles acknowledged that his team was “outschemed” and “outplayed”, and singled out the game plan they had on the back end as an example.