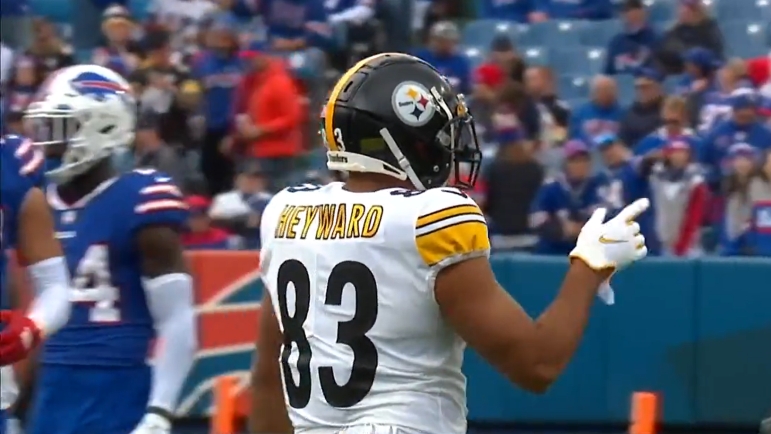 The injury report for tomorrow’s game was not a pretty one. While the defensive secondary was hit pretty hard, the absence of second-year tight end Pat Freiermuth is also a significant one, as it leaves the Pittsburgh Steelers with just Zach Gentry and rookie sixth-round pick Connor Heyward to man the position.

While Gentry has experience, he has been used primarily as a blocking tight end, though he—and perhaps the team—believes that he has more receiving ability than he has had the opportunity to demonstrate thus far.

As for Heyward, he is not native to the position, either historically or biologically, and that’s going to be a problem when it comes to blocking assignments, leading me to wonder if they will utilize the tackle eligible. But he has hands. And a rapport with fellow rookie quarterback Kenny Pickett, now the starter.

“Me and him came in at the same time”, he told reporters earlier in the week about the first-round pick, via Teresa Varley for Steelers.com. “I feel like sometimes he knows where I am going to be. We have the same mindset and feel for the game. That comes from having reps together in the preseason, minicamp and training camp.”

Pickett was inserted into the starting lineup a game and a half ago, and admittedly has yet to throw a touchdown pass, though he did run for two. He has completed 44 of 65 pass attempts thus far for 447 yards with four interceptions, though only one last week.

Heyward only played 12 offensive snaps combined in the Steelers’ first four games, but he logged 10 on Sunday, primarily late, after Freiermuth was injured. It afforded him the opportunity to field his first two targets, both catches, combining for 12 yards and a first down. His teammates expect to see more Sunday.

“Connor’s gonna get a lot of reps, obviously, with Pat being out”, running back Najee Harris said, via the team’s YouTube channel. “But just even earlier in the year, he showed a lot of big-time plays. I can remember one time he made a one-handed catch that raised a lot of eyebrows. Obviously, he’s gonna get a good opportunity, and against a good team”.

It will be interesting to see how the Steelers handle the personnel issues that they have on hand. At the same time, the Tampa Bay Buccaneers have some injuries in the secondary. They may consider using some four-receiver sets on occasion, especially if they happen to activate Calvin Austin III before Sunday’s game.

There is also fullback Derek Watt, whom the team has not been afraid to line up at the line of scrimmage, something that they also did with the similarly sized Roosevelt Nix before him. And, again, there’s the tackle-eligible possibility, presumably with Trent Scott or Jesse Davis.