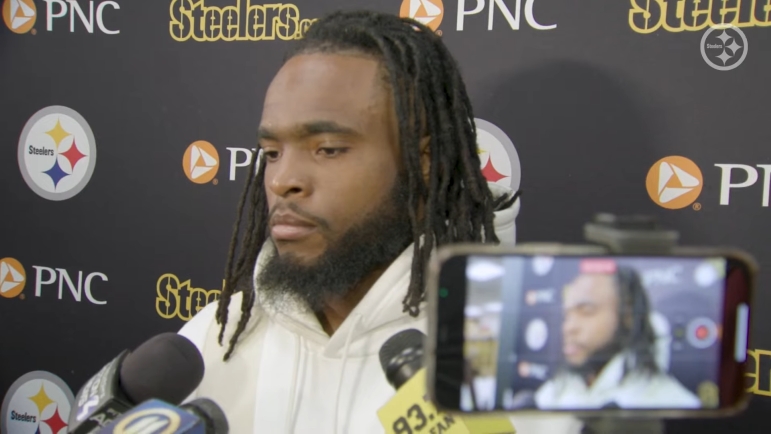 Fourth-year Pittsburgh Steelers wide receiver Diontae Johnson made headlines after Sunday’s game more for what he said afterward than for what he did during it, although he came awfully close to a highlight-reel touchdown.

Officially, his stat line for the game says two receptions on four targets for 11 yards, with one target resulting in an interception that went off his hands. Not a great afternoon, but he certainly could have been used more. Yet what he said about the team after the game drew more attention, saying that they were in a “rebuilding year”.

He was asked to clarify or elaborate on what he meant by that, and one thing he didn’t do was claim that he misspoke. He meant to say that the Steelers are in a rebuilding year. Just not in the way most people use the term.

“I didn’t mean anything negative by it”, he said, via the team’s YouTube. “It’s just, we’ve got a lot of young guys, not a lot of older vets like it was my first three years in the league, like 7 [Ben Roethlisberger], [Maurkice] Pouncey, those type of guys. There’s not a lot of those vets”.

“Like I said, it’s a rebuilding year”, he reiterated. “We’ve got a lot of young players. This is our first time playing together. We’re still trying to get comfortable with each other. It wasn’t nothing negative. It’s football. We’ve just got to build that chemistry, and it’s gonna come along”.

This was something I considered getting into in my article on Sunday evening, but I chose not to. What is a ‘rebuilding’ year? Is it a year in which you know that you’re not going to win and so you do things that you otherwise wouldn’t do if you were trying your best to win every game?

Or is it simply a year in which you’re in transition from one foundation to the next, something that would be synonymous with a bridge or transition year? I do think it’s worth at least acknowledging, because the term ‘rebuilding year’ is a loaded one that carries implications with it.

One thing I can’t see the Steelers under Mike Tomlin ever doing is giving in and not trying to win every game when the results of the season are in contention. Whether for the better or for the worse, they’re going to make their best efforts to win the Super Bowl every season even if, from the outside, no hope of such ambitions can be supported.

Whether this is a ‘rebuilding year’ or not, it’s certainly a transitional one. It can’t not be when your franchise quarterback is gone and you’re moving on to the guy whom you hope is the next. Kenny Pickett just took the first snaps of his career on Sunday. This is just the beginning.