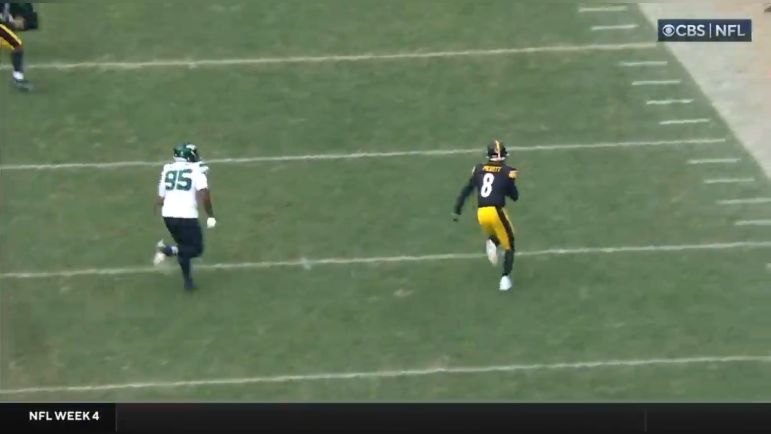 From the moment rookie quarterback Kenny Pickett entered the lineup in last Sunday’s loss to the Jets, there seemed to be a pulsating energy, not only surrounding the team, but inside Acrisure Stadium. The team’s first-round pick, the presumed heir to the vacated throne left by Ben Roethlisberger, was finally entering the lineup to replace an ineffective Mitch Trubisky. In doing so, he etched his name into the record books, as the only QB in his first career game to run for multiple touchdowns, as he ran for two on the day.

Pickett has been on-record recently stating that he likes contact, having played defense from an early age, while also growing up with a father in Ken Pickett whose play at linebacker etched his name in the Hall of Fame at Division II Shippensburg in Pennsylvania, where he also holds the school’s career tackles record.

In last Sunday’s game, the younger Pickett got leveled by Jets defensive lineman Quinnen Williams, and afterward, Pickett could be seen smiling and talking trash as he got to his feet. Earlier today, offensive coordinator Matt Canada was asked about the edge that Pickett plays with when it comes to his willingness for contact.

“I think some of those things are that everybody’s got to play to their personality,” Canada said via an official team transcript. “So, how he does it and what he gets himself going with is great, but still, it’s a bottom-line business in how you play and how you perform.”

Coincidentally, the Steelers will face another quarterback this Sunday in Josh Allen who also seems to prefer contact, and one who’s quite literally embarrassed several defenders so far this year. Obviously the team doesn’t want Pickett to be stiff-arming defenders in the physical manner that Allen has, but the front office had a desire for mobility at the position ever since Roethlisberger retired, and it’s clear they have one now with who they hope is their future franchise signal-caller in Pickett.

In their own division, the team faces elusive QBs like Baltimore’s Lamar Jackson and Cleveland’s Deshaun Watson. Even Joe Burrow of the Bengals has shown he possesses the wheels to take off every now and then, despite suffering a torn ACL during his rookie season. Pickett is now the latest to join the party.

“It’s obviously a really big part of the game right now. But to the earlier question, how many hits do you want your quarterback to take? There’s got to be a balance there and we’ve got to be careful with that. I love it, but we’ve got to be smart about it.”