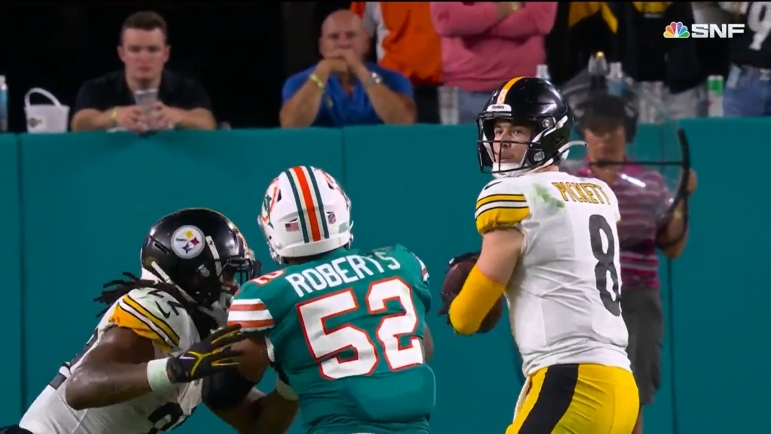 The Pittsburgh Steelers have struggled with creating big plays on offense, and sometimes when they’ve tried to, the ball has ended up in the hands of the other team. Starting quarterback Kenny Pickett has been more aggressive than Mitch Trubisky, but that has come with a cost as he’s thrown seven interceptions in four games.

Offensive coordinator Matt Canada was asked about Pickett’s aggression today in his weekly press conference transcribed by the Steelers.

“Everybody’s not perfect, but I think he’s good on that. There’s things you saw that he certainly would love to have back, a couple mechanical things that were really critical, and he knows that, but I don’t know that that’s a big issue with him.”

Canada does not seem upset about Pickett’s aggression and it does not sound like he wants to put a leash on his rookie quarterback, either. It also appears that Canada thinks that Pickett’s decision-making has been fine, but instead his mechanics have resulted in some of the interceptions he’s thrown.

That is probably a good thing for Pickett and the Steelers as it is fixable. There is no reason to limit what Pickett can do on offense; you have to see what you have in your rookie quarterback. In fact, I would say Pickett should take more shots down the field to try and get the offense going as it has been lifeless pretty much all season.

At the end of the day, mechanical issues are fixable, and with Pickett being a little less gifted in the arm strength department, he just needs to make sure he’s mechanically sound whenever he is throwing the ball down the field.

There is still a lot of football to be played this season, and Pickett’s slow start shouldn’t be too big of a concern. Chase Claypool and George Pickens are starting to become bigger factors in the offense as Pickett begins to get more comfortable. For this offense to succeed Canada needs to scheme up ways to get his playmakers the ball. The only way to do that, though, is to let Kenny Pickett sling the ball around the field. Canada has to continue to let the rookie be aggressive. His job might depend on it.